Posted by Phil Newsome on March 25, 2018
A popular Facebook Page with more than 249,000 followers on social media, Thinking Minds made another controversial expose on how the Yellows allegedly used psychological warfare in the Boracay issue. 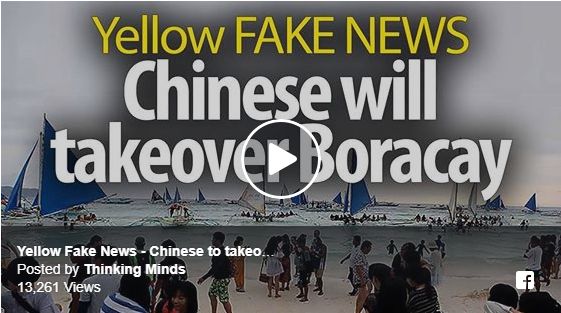 In a viral video posted on social media, Thinking Minds revealed that the Yellows are using psychological warfare by mixing truth and lies which is considered as a "bad news" for all Filipinos and it is seems be working nowadays.

Watch the Video Presentation and Expose of Thinking Minds:

Some news media outlets allegedly used psychological warfare and a number of Duterte Die Hard Supporters (DDS) are doubting the intention of the President in the upcoming closure of Boracay Island in the next few days.

During a recent press conference, a member of the Malacanang Press Corps asked an intriguing questions about the closure of Boracay and the planned construction of a casino by some Chinese businessmen.

ThinkingMinds claimed that the purpose of the Yellow Fake News is to deomoralize Duterte supporters and the Yellows do this by mixing truth with lies. The Yellow Fake News wanted to convey the Yellow fake news that says "Boracay's closure is NOT for rehabilitation." "It is to prepare for the Chinese Casino!"

The popular FB Page noted further that the Yellows want supporters to be Disappointed in Duterte. Psychological Warfare is used against Duterte! The Yellows allegedly set up a series of small lies to set up a big lies which aims to convince some DDS to get angry with the President.

The series of small lies includes the statement that Boracay is already congested, it is overdeloped, and proliferates the news that the closure of Boracay was due to the entry of a Chinese casino.