Posted by Phil Newsome on March 27, 2018
Secretary Mark Villar, one of the hard-working Cabinet Member of Pres. Rody Duterte confirmed that the Department of Public Works and Highways (DPWH) aims to commence this year the construction of a new bridge that will replace the typhoon-damaage Caray-Caray Bridge in the province of Biliran. 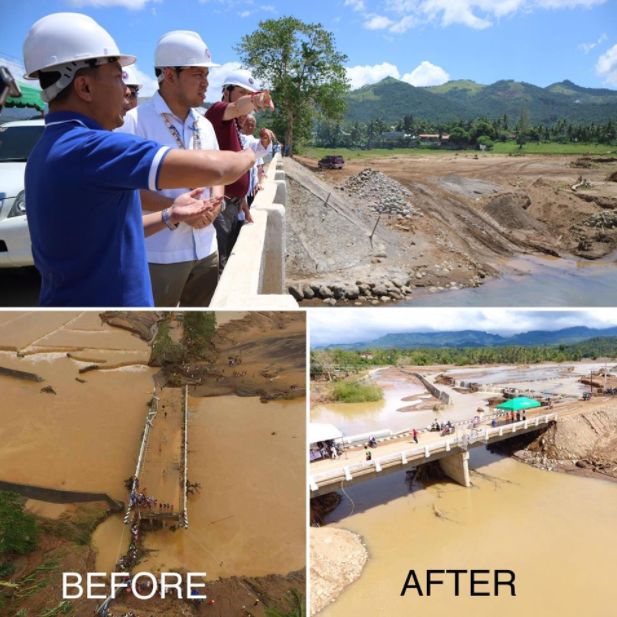 DPWH Region 8 Director Edgar B. Tabagon stated that Sec. Mark Villar ordered the immediate implementation of the Caray-Caray Bridge Project which is now under planning stage.

Director Tabacon was quoted as saying "As per Secretary Villar, this is a priority project for implementation within the year as Caray-Caray Bridge is the shortest access from Biliran going in and out to mainland of Leyte,” said Director Tabacon.

At present, only light vehicles can utilize the damaged Caray-Caray Bridge which has been temporarily fixed by the DPWH Biliran District Engineering Office (DEO). Last January 9, 2018, DPWH reopened the bridge to light vehicles after implementing backfiling and embankment works to serve as temporary passage for the public.

Due to order of the DPWH not to allow heavy vehicles to use the bridge, all heavy vehicles have to take the alternate long route of Naval-Almeria-Kawayang-Culaba-Caibiran-Cabucgayan Road which is about 90 kilometers compared to the 19 kilometers when crossing the Caray-Caray River.

In order to address the issue of bridge closure to heavy vehicles, the DPWH will construct a temporary detour bridge for heavy vehicles before the total replacement of Caray-Caray Bridge is completed. The said project will reduce travel time of heavy vehicles coming from Biliran to Naval from two (2) and a half hour to just 30 minutes.

Biliran's Caray-Caray Bridge was rendered impassable to all types of vehicles in December 16, 2018 due to washed out/scoured bridge approaches brought by the onslaught of Tropical Storm "Urduja."