Commissioner Lapeña: "105 Container Vans Confiscated by the BOC All Accounted For"

Posted by Phil Newsome on March 30, 2018
The former chairman of PDEA and current head of the Bureau of Customs, Gen. Isidro Lapeña confirmed that all the 105 container vans that were illegally released at the Asian Terminal Inc. (ATI) container yard have been accounted for. 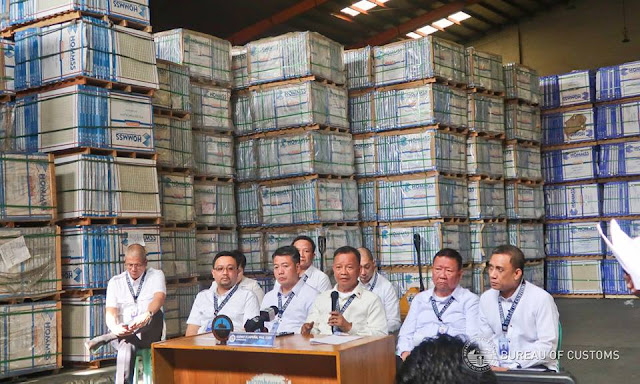 According to Commissioner Isidro Lapeña the Customs agents found all the container vans containing tiles, contrary to some initial reports that the illegally-released shipments also contained diapers and canned goods.

The BOC said that the estimated value of the shipments still stand at P69 million based on its declaration but the BOC chief said "the value can still go up because the shipments were alerted for undervaluation in the first place."

The shipments all came from China were about to undergo 100-percent physical inspection but the shipments had already been released.

Based on Customs processes, a shipment that have been alerted should be subjected to 100-percent physical examination and only the commissioner is allowed to authorize release of the alerted shipments, however the shipments were released without lifting order issued by Commissioner Lapeña.

Commissioner Lapeña explained that the shipments were released by ATI because a certain Darwin Dalmacio, ship manager of ATI, allegedly untagged the shipments from the systems so it can be released upon the receipt of the alleged forged transmittal released order.

Since the release of the controversial shipments, five Customs officials have been placed under preventive suspension pending investigation.

The accreditation of 10 importers and three customs brokers were also revoked by the Account Management Office last March 22, 2018.