Posted by Phil Newsome on September 19, 2017
Veteran journalist and former correspondent of ABS-CBN, Ira Panganiban lectured Commission on Human Rights Chairman Chito Gascon on their real mandate based on the Philippine Constitution. 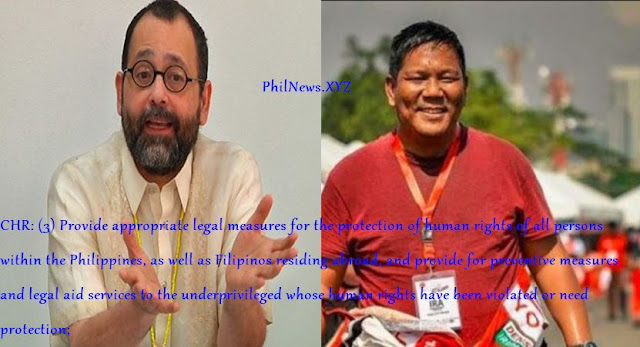 According to the veteran journalist the mandate explained by CHR about their roles on ordinary crimes is contrary to their real mandate based on Article XIII Section 18 of the Philippine Constitution which served as basis of the CHR's job.

CHR Chairman Chito Gascon claimed on their various interviews that ordinary crimes are not part of the commission's mandate despite the fact that a certain provision of the Constitution clearly stated that the CHR shall "Provide appropriate legal measures for the protection of human rights of all persons within the Philippines, as well as Filipinos residing abroad, and provide for preventive measures and legal aid services to the underprivileged whose human rights have been violated or need protection."

Ira Panganiban wanted to know the main reasons why the CHR just focused in one of the provision of CHR's mandate that states they should "Monitor the Philippine Government’s compliance with international treaty obligations on human rights."

Section 18. The Commission on Human Rights shall have the following powers and functions:

(1) Investigate, on its own or on complaint by any party, all forms of human rights violations involving civil and political rights;

(2) Adopt its operational guidelines and rules of procedure, and cite for contempt for violations thereof in accordance with the Rules of Court;

(3) Provide appropriate legal measures for the protection of human rights of all persons within the Philippines, as well as Filipinos residing abroad, and provide for preventive measures and legal aid services to the underprivileged whose human rights have been violated or need protection;

(5) Establish a continuing program of research, education, and information to enhance respect for the primacy of human rights;

(6) Recommend to Congress effective measures to promote human rights and to provide for compensation to victims of violations of human rights, or their families;

(8) Grant immunity from prosecution to any person whose testimony or whose possession of documents or other evidence is necessary or convenient to determine the truth in any investigation conducted by it or under its authority;

(9) Request the assistance of any department, bureau, office, or agency in the performance of its functions;

(10) Appoint its officers and employees in accordance with law; and