Posted by Phil Newsome on March 05, 2020
Senate Minority Floor Leader Sen. Franklin Drilon made some headlines anew on social media after a video of his guesting on CNN Philippines went viral on social media because he was caught sleeping during an exclusive interview. 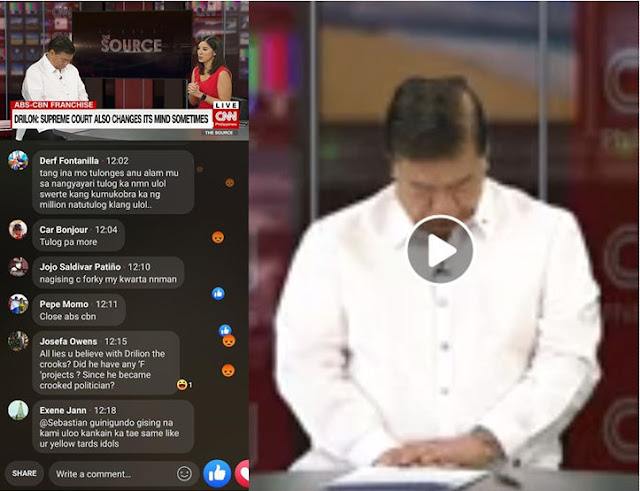 Sen. Drilon was caught on camera sleeping during an exclusive interview with veteran journalist Pinky Webb on her show, The Source.

The discussion between Drilon and Hontiveros was about the pending application of ABS-CBN to renew their franchise. According to Drilon, the interpretation of Constitution is not a monoply of the Supreme Court.

If there is a pending application, the senator explained that the Philippine Congress can ask for NTC permit. Meanwhile, according to former Chief Justice, ABS-CBN cannot operate without a franchise.

Pres. Duterte for his part, he already had a change of heart as he accepted the apology of ABS-CBN. He also denied some reports that he is influencing Congress in the renewal of ABS-CBN's franchise.

During the later part of the CNN Interview, at approximately 12:10, the senator was caught sleeping on camera while being broadcasted to millions of viewers from different parts of the country.

Netizens also reacted with the alleged sleeping habits of Sen. Franklin Drilon who have been caught sleeping not only once during Senate sessions.

Here's Some of the Comments on Sen. Drilon's Sleeping Habit:

Leonardo Selfaison Pangilagan: We may tolerate such unethical act if the individual doing it is working doubly hard while sober. We may attribute such selfish demeanor to tiredness and exhaustion. But the irony is, evidently the guy does more damage to the nation while awake. He's a liability either and both ways. Shame for indifference. May he prolong his rest as in long, longer, very long period.

Abet Francisco: I agree with Tp that this guy has a health problem. that is the normal tendency of a person who never exercise. when the muscles in our body..become soft the more chances of getting into sleeping habit. this kind of behavior only a manifestation of a person who is soon to die. that is according to some doctors.

Arnold Bati: "Sleeping on the job"? Drilon, an elected Senator, a former Justice secretary, one of the few who took us to the "Daang MATUWID" but has "awakened "us all with his annoying snore."

Danny Gorospe: Now for those fired or terminated from their jobs can now sue their employers for “Wrongful Dismissal” on the same scenario using this clip as reference just saying.

Nikita Alberto: A sari sari store canot operate if u don't have licence. Authomatic close with the order of the mayor or even the brgy chairman. Now that the ABS CBN is thier media network could operate even there is no licence?