Netizen Reveals the Genius of Pres. Duterte on his Fight Against the Oligarchs

Posted by Phil Newsome on February 14, 2020
Concerned netizen John Lana posted an interesting statement showing the genius of Pres. Rody Duterte and how he was able to utilized the genius of the Solicitor General on his fight against the country's oligarchs. 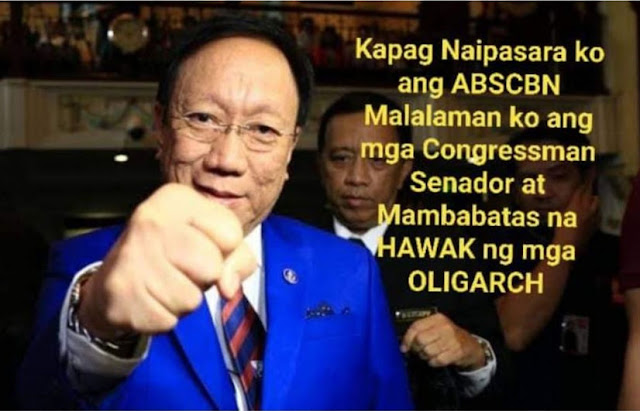 According to the concerned netizen, every move of Pres. Rody Duterte has a purpose and he is indeed a game player in terms of his leadership style.

The President's genius was clearly seen when he fought against the oligarchs who controls the country's water industry, he fought against media giants ABS-CBN and alleged US-Funded news outlet Rappler due to their non-payment of taxes and the alleged stocks owned by foreigners which is indeed onerous and against the law.

John Lana noted that the President's moves against the oligarchs is not only due to the implementation of the laws of the land but also to identify their allies in Congress and in the Senate.

The President also terminated the Visiting Forces Agreement (VFA) with the United States to determine and identify who among his military generals and lawmakers were with him and not with him. He also wanted to proved to the leftist communities that he is serious in terms of nationalism.

EVERY MOVE OF PRRD HAS A PURPOSE. IT'S A GAME PLAYER.

Hindi lamang for the purpose of implementing the law but also to identify their allies in Congress and in the Senate at iba pa. Babaha ang lobby money nyan sa mga lawmakers.