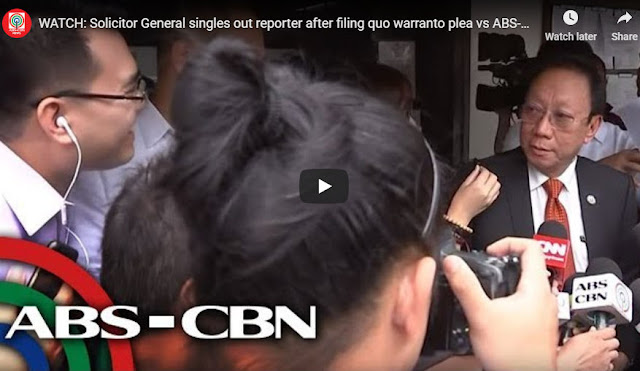 The Solicitor General file a quo warranto petition before the Supreme Court to revoke the network's franchise of the country's largest TV Network.

The reporter was identified as Mike Navallo, a reporter who covers the justice beat for ABS-CBN. He approached SolGen Calida together with other journalists to ask for a copy of the quo warranto petition against the network.

"Because I'm also from Mindanao," SolGen Calida said, he is from Davao City, the city where the Duterte Family dominated the political scene.

SolGen Calida then told Navallo: "Lagi mo akong binabanatan. Abogado ka rin pala e." He even challenged the reporter to just practice his profession as a lawyer and they might see each other in court.

ABS-CBN Reporter Mark Navallo reported last year that despite Malacañang's denial, Calida's office was involved in drafting the affidavit of a certain Peter Joemel Advincula alias Bikoy, who accused members of the opposition of sedition.