Posted by Phil Newsome on February 09, 2020
British blogger and prominent supporter of Pres. Rody Duterte, Malcolm burned down self-proclaimed Dilawan and critic of Duterte, Raissa Robles after she criticized and belittled the achievements of Sen. Manny Pacquiao. 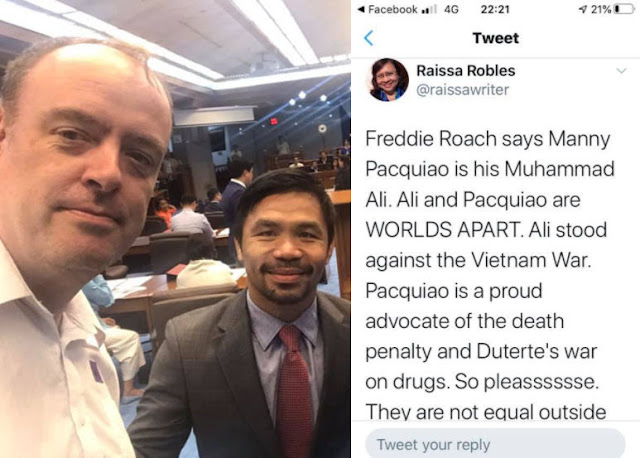 Raissa Robles made headlines on social media after she posted the following statement:

The statement of Raissa Robles caught the attentions of Malcolm Conlan who issued an Open Letter lecturing Robles for her unsolicited statement against Manny Pacquiao.

Conlan asked about the things that Raissa Robles have done for the Philippines when compared to Manny Pacquiao who have done so much for the Filipino poor in improving their lives.

The British blogger also asked if Robles is considered as a shining example to the Filipino people or someone who has risen from poverty to become an inspiration to many.

I would just like to ask ma’am, what have you done for the Philippines?

Have you built a university or hospital? Have you given money to the poor?? Have you improved the lives of hundreds if not thousands of Filipinos?

Are you a shining example to the Filipino people of someone who has risen from poverty to become an inspiration to many?

Have you spoken at Oxford university to inspire many?

What have you done for the Philippines ma’am, other than spread fake news about the Duterte administration and the democratically elected President of the Republic of the Philippines

Senator Manny Pacquiao is not perfect, none of us are. BUT I am very sure that he has achieved a lot more for the Philippines and Filipino people than you have.

I would also agree with his trainer, Freddie Roach. Senator Manny has become like Ali, he is an iconic figure worldwide and has done so much for others!!!

Netizens also reacted with the statement of Conlan Against Raissa Robles:

Jeck C Berondo: She is number one purveyor of fake news. Find this woman where can we see this shit. Mmm id like to throw some durian fruit in her face.

Janine Therese Nolasco: This Robles is just sourgraping since she has not achieved what Manny has done to reach his status now. Robles, despite being a degree holder remains just what she is until now: SOUR LEMON!

Carlo Clinton Mandreza: On point sir Malcolm Conlan...
People hating the Peoples Champ Manny Pacquiao should first build atleast 10 houses for the poor coming from their hard earned(blood and sweat) money before they come close to worthiness on hating.