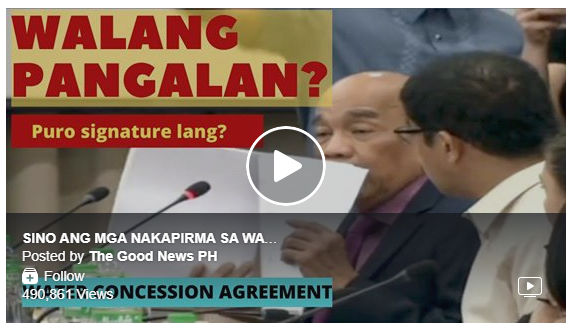 Congressman Elpidio Barzaga asked the MWSS Representative during the Joint Hearing, about the signatories of the water concession agreement which was dubbed by Pres. Duterte as "onerous."

The congressman asked the specific names of the signatories of the controversial contract signed without their printed name. The MWSS representative revealed that the signatories in part of Maynilad are the Lopezes and a French company.

Cavite Congressman Barzaga was quoted as saying "What we see is only  are their signatures. There are no printed names, kung sino ba ang mga pumirma," referring to the water agreement.

The congressman presented the contract without the printed name of the MWSS and the representatives from the two water concessionaires.

"This is a billion contract running for a period of 25 years,  and even the printed name of the signatories are not present."

The joint hearing was held on December 11, 2019, investigating the water concession agreement which was signed  without the printed name of the signatories.