Posted by Phil Newsome on December 08, 2019
Veteran blogger and prominent social media personality with millions of followers on social media, Thinking Pinoy, released an interesting expose just hw big is Pres. Duterte's war against abusive water concessionaires, and the reasons why many of the President's allies silent about it. 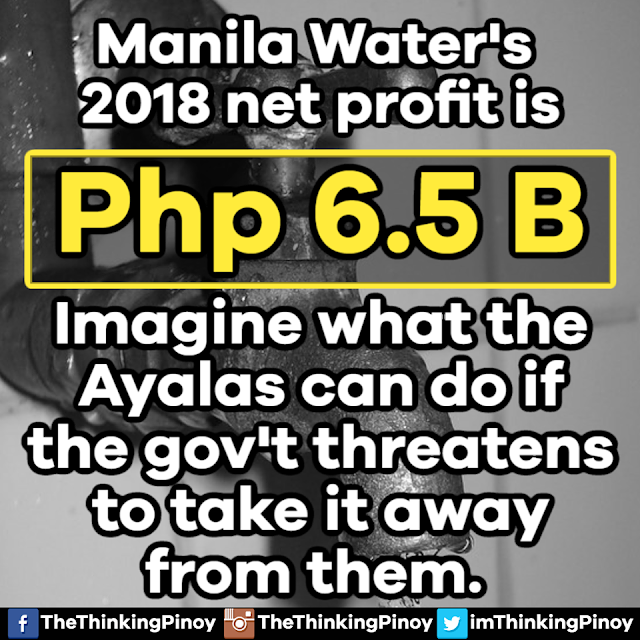 According to the information gathered by Thinking Pinoy or R Nieto in real life, revealed that during the year 2018, Manila Water posted a net profit of P6.5 billion [1]. Now, the concession agreement was prematurely extended to 2037 [2], meaning it still has about 19 years left to operate.

Thinking Pinoy noted that with the very modest assumption that Manila Water will earn a static P6.5 billion annually, that means it stands to earn Php 6.5 B× 18 = Php 123.5 billion over the next 18 years.

The veteran blogger also made a calculations that the Ayalas, owner of Manila Water, could possibly do what he described as a political strategy as they could fund a Presidential candidate that costs a lot less that P5 billion. It is a viable option to loss half of their assets, which is better than losing everything.

Thinking Pinoy also raised some doubts among politicians or PRRD's closest allies, who have historically been one of the noisiest, remain deafeningly silent on the issue involving Maynilad and Manila Water.

JUST HOW BIG IS DUTERTE'S WAR AGAINST THE ABUSIVE WATER CONCESSIONAIRES, AND WHY ARE MANY OF HIS NOISIEST ALLIES SILENT ABOUT IT?

What would you do if you are about to lose over P120 billion?

Manila Water in 2018 posted a net profit of P6.5 billion [1]. Now, the concession agreement was prematurely extended to 2037 [2], meaning it still has about 19 years left to operate.

Note that this is a very modest estimate, as it does not take into account increased (a) per capita consumption as a result of economic growth and (b) population increase that results in more customers for Manila Water. That is, the company stands to earn a lot more than Php 123.5 billion.

We are just talking about Manila Water here: I haven't even taken Maynilad Water Services, Inc.'s earnings into account yet.

Now that Pres. Rody Duterte threatens to take away Manila Water's candies, how much of this prospective income will the Ayalas, who control Manila Water, be willing to use to prevent it, and where will they use it on?

Surely, losing half of that is a lot better than losing everything, right?

This is not to say that the Ayalas will actually do what I'm about to describe, but a presidential campaign typically costs a lot less than Php 5 billion, and co-opting high-ranking politicians while waiting for 2022 will probably cost a lot, lot less.


Now, do you wonder why many of PRRD's closest allies, who have historically been one of the noisiest, remain deafeningly silent on the issue.

How much more if an ally posted a negative net worth in her SALN?

There's lots of money that could be at stake, and it's not crazy to suspect that some want a chunk of it.

"Do not believe the clamor of the people because when the water gets rough you'll find that you're the only one sailing the lonely sea."

He didn't say that for nothing. Think about it.

He is putting everything on the line for you, so why shouldn't you help him?