Posted by Phil Newsome on December 07, 2019
The tough-talking President of the Republic reiterated his concerned as he is determined to unmask the former company of Sen. Franklin Drilon, the Angara Abello Concepcion Regala & Cruz Law Offices (ACCRALAW) firm. 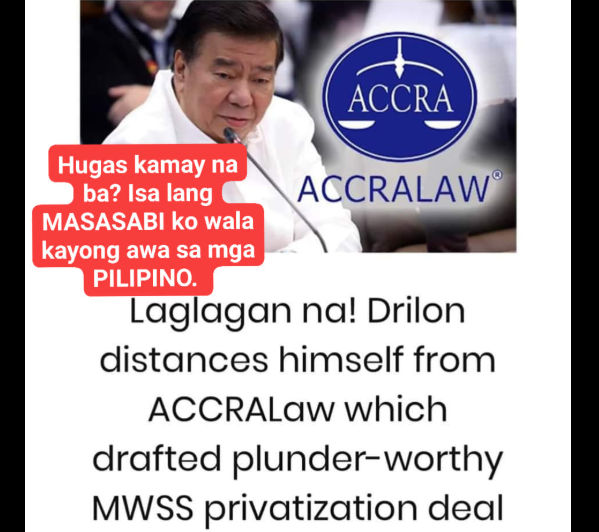 Sen. Franklin Drilon once served as ACCRALAW's senior counsel and he was allegedly involved when the MWSS divided its East and West zones to Maynilad Water Services and Manila Water Company of the Ayala Group.

The President also revealed during an interview with the media that Sen. Drilon, one of his staunchest critics, sent a text message to Executive Secretary Salvador Medialdea denying that he had anything to do with the MWSS privatization.

Pres. Duterte added further that "They entered into a contract. I do not know who was the lawyer kaya ko binuko si Frank. Tapos may text siya, sabi niya, "You tell Rody I'm not part of it," he added.

The President already warned Sen. Drilon to 'tell the truth' about the alleged irregular water deals.

A few days after the controversial expose of Sen. Drilon regarding the SEA Games cauldron and the successful opening ceremony of the games despite some negative news, Pres. Duterte made an explosive expose about the controversial contract entered by the government with Maynilad and Manila Water owned by Pangilinan and Ayala respectively.

Pres. Duterte has threatened to defy the Singapore arbitration court decision against the Philippine governmenet, ordering the administration of Pres. Duterte to pay P3.4 billion to Maynilad and P7.4 billion to Manila Water for government's refusal to increase water rates.