Posted by Phil Newsome on December 12, 2019
Word-renowned band U2 pays tribute to women who lights up history as they song 'Ultra Violet' but the song was met with loud booo from the audience after flashing Maria Ressa's face on the big screen. 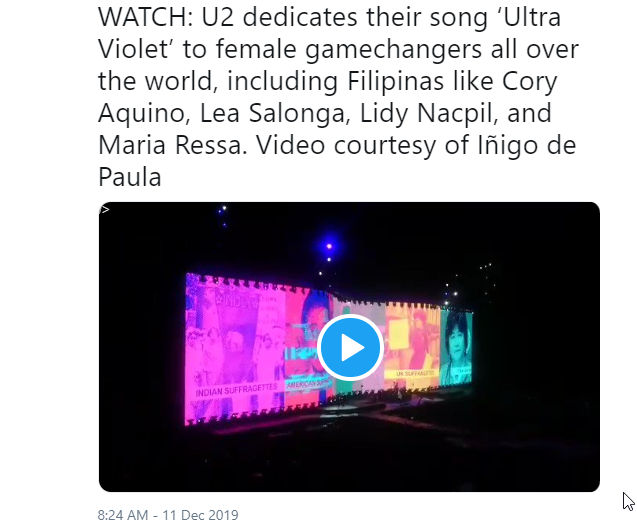 U2 held a historic first concert in the Philippines on Wednesday, December 11 at the Mall of Asia Arena which also coincides with the closing ceremonies of the successful Southeast Asian Games, made some negative headlines on social media.

The band headed by social activist Bono, paid tribute to female gamechangers all over the world and one of those being featured in the backdrop, is Rappler CEO and executive director Maria Ressa.

Bono then said, "For Maria Ressa," before launching into the band's 1991 song, "Ultra Violet (Light My Way).

Concert-goers then loudly disagreed with Bono's statement as they shouted out of disappointment and booed the concert for a few seconds and some of them even walked out from the venue showing frustrations and posting it on social media.

According to some concert-goers, the name of Maria Ressa was not only mentioned once but many times over, during the duration of the concert.

WATCH: U2 dedicates their song ‘Ultra Violet’ to female gamechangers all over the world, including Filipinas like Cory Aquino, Lea Salonga, Lidy Nacpil, and Maria Ressa. Video courtesy of Iñigo de Paula pic.twitter.com/aCAu64WeXP