Posted by Phil Newsome on December 04, 2019
The Ayala-owned Manila Water Company, Incorporated clarified that the arbitral award issued to Manila Water's favor against the Philippine government is for acts committed by officials of the previous administration and not by the Duterte administration. 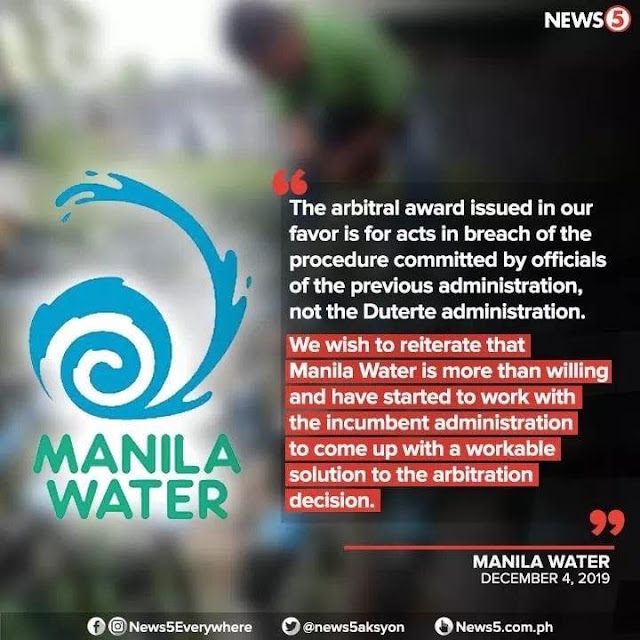 Manila Water stated further that "We wish to reiterate that Manila Water is more than willing and have started to work with the incumbent administration to come up with a workable solution to the arbitration decision."

The official statement of Manila Water is part of their answer to the allegations presented by Pres. Duterte earlier that the Ayala-owned company serving water consumers in Metro Manila were allegedly given the favor to collect billions of damages from the Philippine government.

Pres. Duterte said on Tuesday that the government was being "milked by billions" due to the compensation that was due to Manila Water and another P3.4 billion to Maynilad Water Services. The compensation was for losses due to denied petitions for rate increase.

The Manila Water said Wednesday in response to Pres. Duterte's call as they noted that it was "more than willing" to strike a "workable solution" with the Duterte government over a 7.4 billion compensation from the state.

Manila Water Company, Inc. is the sole provider of water and used water services to over six million people in the East Zone of Metro Manila. It is a subsidiary of the country's oldest conglomerate Ayala Corporation.