Posted by Phil Newsome on November 23, 2019
One of the country's most popular journalist and TV Host who helped a lot of people through his radio and TV program, Raffy Tulfo is now in hot water after earning the ire of netizens for making a public school teacher to resign in one of the episodes of "Raffy Tulfo in Action." 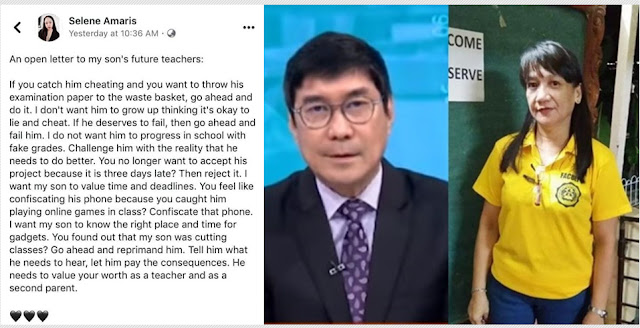 The drama regarding the involvement of Raffy Tulfo and the teacher who disciplined the student in an old school way, resulted into various reactions among netizens and one of them wrote an open letter that went viral on social media.

A concerned netizen identified as Selene Amaris, disagreed with the decisions and suggestions of Raffy Tulfo for the teacher to resign or get sued. The teacher decided to resigned but she got the support of some netizens.

Selene Amaris expressed her support for the teachers in a diferent way, thus endearing her to fellow netizens.

In the open letter of Amaris she gives the authority to the future teacher of his son to disciplined him in an old school way.

If you catch him cheating and you want to throw his examination paper to the waste basket. Go ahead and do it. I don't want him to grow up thinking its okay to lie and cheat.

If he deserves to fail, then go ahead and fail him. I do not want him to progress in school with fake grades. Challenge him with the reality that he needs to do better.

You no longer want to accept his project because it is three days late? Then reject it. I want my son to value time and deadlines.

You fell like confiscating his phone because you caught him playing online games in class? Confiscate the phone. I want my son to know the right place and time for gadgets.

You found out that my son was cutting classes? Go ahead and reprimanded him. Tell him what he needs to hear, let him pay the consequences. He needs to value your worth as a teacher and second parent.