Posted by Phil Newsome on September 11, 2019
The tough-talking President of the Republic of the Philippines, President Rody Duterte blames Sen. Grace Poe for delaying the "Emergency Powers" to solve the rampant traffic problems in Metro Manila's major thoroughfares. 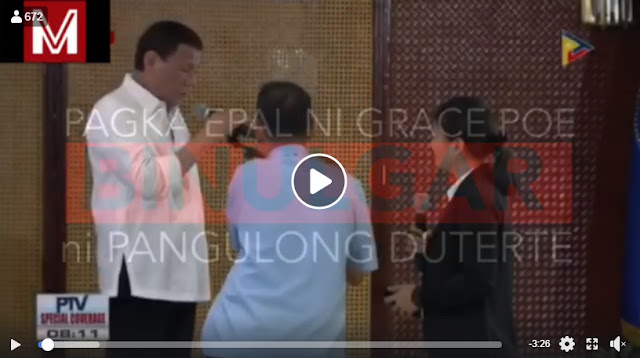 According to President Rody Duterte, a certain lawmaker should be blamed for delaying the possible solutions to solve the traffic in EDSA.

Although the President did not identified the lady lawmaker, veteran journalist and social media personality Carlos Munda of MindaVote, inserted the photo of Sen. Grace Poe in the latest video posted on social media.

As seen in the viral video it is indeed visible in the pronouncement of the President that he was referring to Sen. Grace Poe who sits as the Chairperson on the Senate Committee on Public Order and Safety during the last Congress. She also served as the chairman of Public Services.

When the President learned of the said statement by the Senator he decided not to pursue the emergency powers he wanted for the Congress to grant him.

Pres. Duterte blamed the said senator and if time will come that the lawmaker will run again as President he will surely exposed the said lady as the one who should be blame for the rampant traffic in EDSA.