Posted by PhilNewsXYZ on September 14, 2019
One of the country's most hardworking Cabinet Member of the Duterte administration slammed Sen. Grace Poe for saying that there's no urgency to grant emergency powers to the President after numerous recommendations from experts. 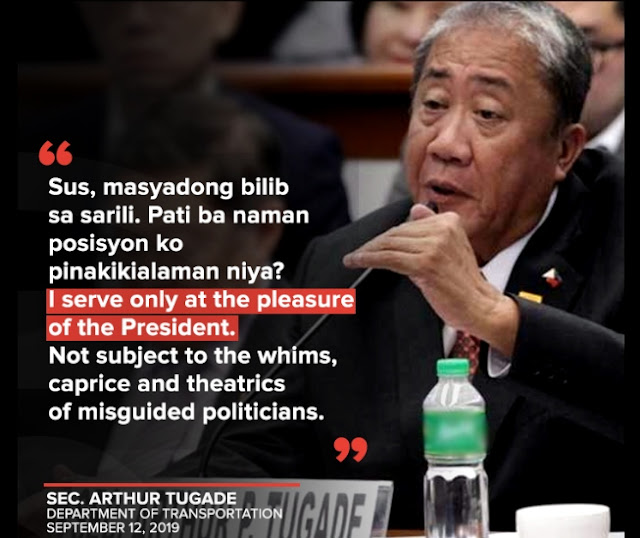 Secretary Arthur Tugade of the Department of Transportation chides the lady lawmaker who was once mentioned by Pres. Duterte as one of the reason why the traffice in EDSA worsened, claimed that the senator should prove herself first before commenting on Tugade's accomplishments.

The statement of Secretary Art Tugade came out on major news outlets after Sen. Grace Poe questioned the pronouncement of some officials that lawmakers should be blame for refusing to grant the emergency powers needed by the President.

“Kung talaga kailangan, eh bakit hindi ibibigay? Pero huwag naman natin sisihin na kaya hindi niyo nagagawa trabaho niyo kasi kahit wala naman ‘yan ang dami niyo na sanang nagagawa (If you really need the emergency powers, then why would we refuse to give it to you? But you should not blame us for your failure to do your job because even without the emergency powers you should have done plenty),” she said.

During a Senate Hearing on Emergency Powers Bill, Sen. Grace Poe claimed that the DOTr should be able to do its job even without the emergency powers with the current laws and executive policies.

Secretary Tugade in his appeal, assured that the proposed emergency powers will not be "forever" and Congress will still be able to exercise oversight in the projects they will implement.

The DOTr will also uphold the people's right to information as Sec. Tugade note that injunction and Road Right of Way (RROW) issues hamper the rollout of their projects, such as the construction of the MRT-7 and the planned integration of bus terminals along EDSA.