Posted by Phil Newsome on August 06, 2019
A concerned netizen and prominent Pro-Duterte micro-blogger Adolfo Mortera called the attentions of the Bureau of Internal Revenue (BIR) for their alleged failure to collect Hacienda Luisita's 43 Years of Unpaid Taxes worth P14.7 billion. 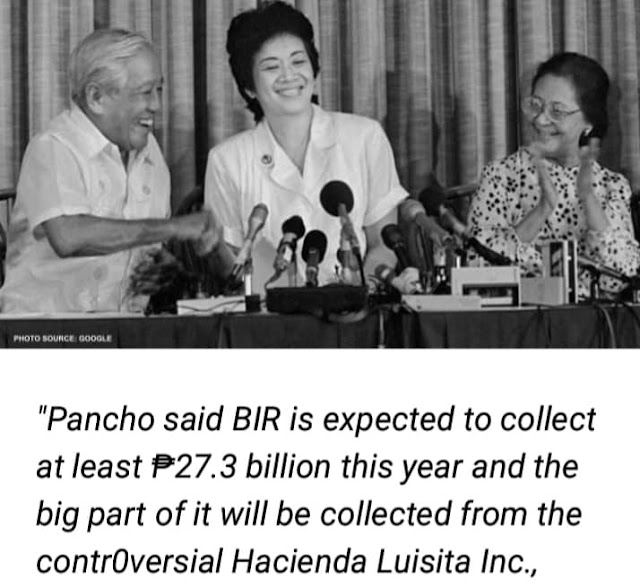 According to Adolfo Mortera the BIR have already colected P6 Billion worth of taxes from Philippine Airlines (PAL) but failed on their effort to collect billions of taxes from the Aquino-operated company Hacienda Luisita.

The concerned netizen even urged Pres. Rody Duterte to declare a Revolutionary Government and sequester all the assets of Hacienda Luisita and distribute it to deserving farmers.

Based upon the 2018 news report, the government of Pres. Rody Duterte is eyeing to collect P100 billion of unpaid taxes from big corporations left unpaid for more than three decades.

BIR officer Teodoro Pancho claimed that they are expecting to collect at least P27.3 billion in the year 2018 and the big part of it will be collected from the controversial Hacienda Luisita Inc., which has not been paying taxes since 1986-the year former Pres. Cory Aquino took over the Malacañang palace.

*** B.I.R, WHAT ARE YOU DOING?
YOU HAVE COLLECTED 6 BILLION FROM PHILIPPINE AIRLINES.
WHAT TAKES YOU SOOOO LONG TO COLLECT FROM HDA LUISITA?

*** PRRD, DECLARE A #REVGOVERNMENT,
SEQUESTER ALL THEIR ASSETS, AND DISTRIBUTE TO THE FARMERS!

Pancho said BIR is expected to collect at least ₱27.3 billion this year and the big part of it will be collected from the controversial Hacienda Luisita Inc., which has not been paying taces since 1986 – the year former President Corazon “Cory” Aquino took over the Malacañang palace. The 6k+ hectare plantation id owned by the Cojuanco-Aquino family.

WHAT IS HACIENDA LUISITA AND WHO OWNS IT

Hacienda Luisita is a sugar plantation located in the province of Tarlac, Philippines, that was bought by the Cojuangco family from the Compañía General de Tabacos de Filipinas.

The hacienda spans various municipalities in the province, including the capital Tarlac City. The estate’s incorporators, who control 70 percent of Hacienda Luisita’s stock shares, are Pedro Cojuangco, the children of Josephine C. Reyes, Teresita C. Lopa’s heirs, José Cojuangco, Jr., and María Paz C. Teopaco, all siblings of the late former President Corazón C. Aquino who, on the day she became President of the Philippines, bequeathed her shares to her children and the Daughters of Charity and other non-profit organizations for fear that it would be used as political propaganda.

The remaining 30 percent of the stock shares was given to farm workers under the Comprehensive Agrarian Reform Program’s stock distribution option scheme.

The estate at 6,453-hectares is as large as Makati and Pasig combined. It features Luisita Golf and Country Club, a world class golf course and Las Haciendas de Luisita Subdivision, a 5-interconnected luxury subdivision.

The record shows the company paid ₱327,879,250 for its 1984 total tax. No recorded payment has been made after the date when Cory became president.

This means according to Pancho that Hacienda Lusita has not paid since 1985, as the last payment on 1985 was for the 1984 tax year.

The BIR computation including penalties said that the controversial real estate owned by the Cojuangco-Aquino clan is liable for ₱14.7-B in unpaid taxes.

Pancho said talks between BIR and the company owners, including former President Benigno Aquino III, are ongoing process, but the BIR official said that pres. Duterte already said he will not enter into any deal that will result to any government loss."/Joy Valle