Posted by Phil Newsome on July 22, 2019
The tough-talking chief executie of our country, President Rodrigo Roa Duterte delivered his fourth State of the Nation Address (SONA) on Monday, July 22, 2019, in front of at least 3,000 lawmakers and guests at the historic Batasan Pambansa in Quezon City. 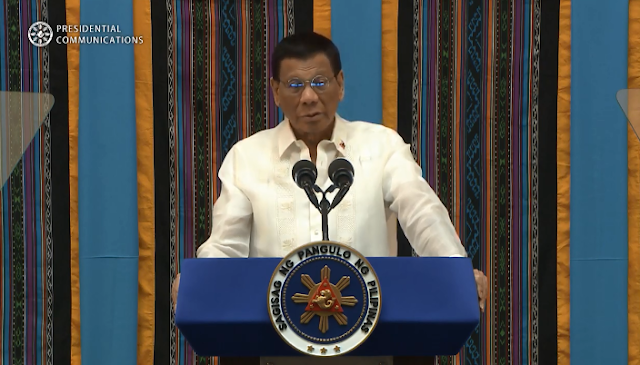 Pres. Rody Duterte's Fourth SONA laid down the plans of the Duterte administration for the next three years and higlighted the accomplishments and the President's legacy during his first three years in office.

The SONA of Pres. Duterte focuses on his administration's key policies, programs and initiatives of the government which were discussed separately in the three-part pre-SONA called "Tatak ng Pagbabago 2019" held in Pasay, Cebu, and Davao this month. The program is to give way for the discussion of achievements instead of incorporating in the SONA.

The President's SONA this year 2019 was once again delayed by one (1) hour as the President waited for the go-signal for the chopper to depart the Palace or Malacañang due to bad weather condition, caused by heavy rains which also derailed the prepared activities of all the Anti-SONA protesters.

Pres. Duterte's speech started at exactly 5:15 in the afternoon and concluded at 6:49 pm or longer in the originally declared 45-minute speech, due to some off-the-cuff remarks of the country's chief executive.

Pres. Rody Duterte started his speech by expressing her gratitude to all who kept faith with him in his most trying times. The President highlighted the latest survey results of Pulse Asia.

"Numbers speak a thousand words, tell a hundred tales, but the landslide victory of the administration candidates as well as the latest survey results show that my disapproval rating is 3 percent."

The former Mayor of Davao City also emphasized that illegal drug problems in the country still persists and corruption among government officials and agencies continues but he promised not to stop on his fight until his term ends.

The President also stated that he wanted to reinstate the death penalty under his administration especially for heinous crimes related to illegal drugs and plunder.

Pres. Duterte lauded the Bureau of Customs, despite being corruption-ridden, the agency managed to collect P585 billion in 2018. "Imagine how much more coul have been collected had the BOC been cleaned and less corrupt."

The President revealed the way some government officials work by saying "We in government talk too much, act too little, and too slow. We are long on rhetoric but short of accomplishments."

The very first President from Mindanao tasked the agencies with poor services to simplify the process and improve it electronically. "You don't have to go to the office. 'Pag hindi pa ninyo nagawa 'yan ngayon, papatayin ko talaga kayo."

The President of the Republic also mentioned the huge success of his government in the rehabilitation of Boracay Island, which was now "restored close to its original pristine state." Pres. Duterte also mentioned the Manila Bay Rehabilitation as they plan to relocate informal settlers along the waterways and shut down establishments that continue to pollute and poison the waters.

Pres. Duterte also made mentioned on the entry of third telecommunications company in the country, the President ensured "there is no corruption at all." He even challenged the player to fulfill its commitment to provide fast and reliable telecom services to people.

The President hopes that the Bangsamoro transition will surely fast-track the establishment of regional government that will secure comfortable life for our Muslim brothers and sisters and indigenous people in all Bangsamoro region.

he president praised DepEd Secreatary Leonor Briones as more Filipino learners are receiving basic education with over 27 million enrollees from kinder to senior high school. He shared approval on the proposed measure to create the National Academy for Sports for high school students.

On West Philippine Sea dispute, Duterte said the avoidance of armed conflict and protection of our territorial waters and natural resources compel us to perform a delicate balancing act.

The President also asked the Philippine Congress to pass the remaining packages of the administration's tax reform program, and excise tax. Pres. Duterte also instruct to pass the Trabaho Bill and the Salary Standardization Law.

The president also urged Congress to hasten the creation of Department of Water Resources, Department of Disaster Resilience and fire protection program. He even joked that an earthquake should strike the Session Hall at that moment.

Duterte said he wants the National Land Use Act to pass this year. This is one of administration's priority legislations to resolve land use conflicts, mandate the formulation of land use plans at the national and local levels.

Pres. Duterte also mentioned that Land Bank should help the coconut farmers in the countryside and not compete with the big commercial banks in the country.

Pres. Duterte's Fourth SONA laid down all the plans of the Duterte administration for the next three years and highlighted his legacy as the country's chief executive.

The President continued his style of SONA speech, the prominent "lecture-mode" during the previous SONA was also visible on his latest address as the father of our beloved nation.

Pres. Duterte highlighted his latest Pulse Asia survey numbers revealing that majority of Filipinos (8 out of 10) believe on his administration as the country's chief executive. The President noted that the high  rating according to Palace is an indication that "for every issue that is thrown at him with such negative force...the more they say that, the more it [rating] goes up."

The explanations of Pres. Duterte was made due to the fact that thousands of Anti-Duterte protesters and militant groups rallied near the Batasan Pambansa asking the government to uphold the country's sovereign rights over the West Philippine Sea, better labor conditions, and end to the bloody war on drugs and lower prices of goods.