Posted by Phil Newsome on July 12, 2019
Concerned netizen and prominent defender of Pres. Rody Duterte on social media, Krizette Laureta Chu expose the alleged lies of Sen. Grace Poe in the controversial Emergency Power issue which was supposed to be granted to the President. 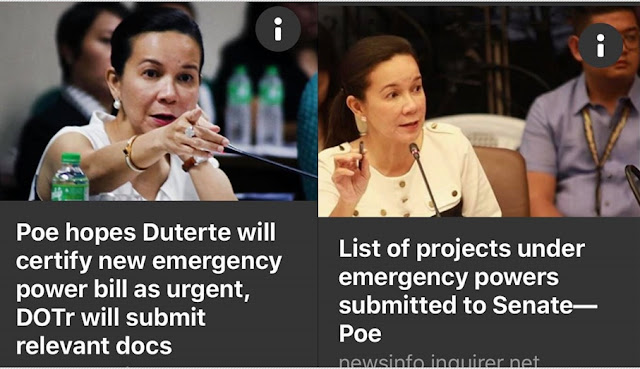 According to Krizette Chu, Sen. Grace Poe is "super grabeng echosera" as she urged the senator to stop being a liar.

Krizette Chu noted that Sen. Grace Poe wanted to clear her name that the reasons why she did not pass the emergency powers was due to not passing of the requirements by the DOTr. The statement of Sen. Grace came out after a survey firm reported an 80 percent approval rating for the President.

“We were all for passing the bill last Congress, if not for the failure of the DOTr to submit to us the list of projects that will be covered by the grant of powers,” said Poe.

“While the DOTr enumerated the list of projects in Metro Manila, Poe noted that it did not provide specific traffic plans for highly urbanized areas like Cebu and Davao.

Now that the DOTr has submitted the list of projects to address the traffic problem, Poe said a technical working group can now start its work on September 8.”

Balita ko lang, chismis lang naman, every morning her and her staff pore through newspapers and looks at the big issues of the day, tapos pipili sya ng pwedeng sakyan.