Posted by Phil Newsome on June 23, 2019
Veteran blogger and Duterte supporter Thinking Pinoy revealed some of the most interesting reasons why PhilHealth defense of Sec. Duque will likely fail and will unlikely to work. Sec. Francisco Duque made headlines after an expose presented by Sen. Ping Lacson regarding PhilHealth transactions with the Duque family business. 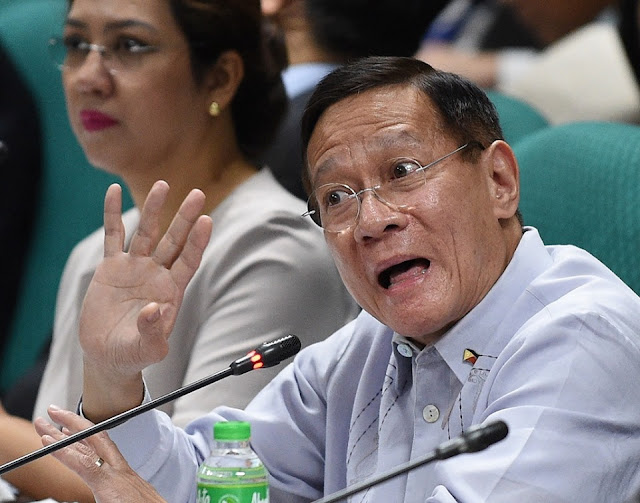 Thinking Pinoy explained and presented some facts why the defense of the government agency PhilHealth will not work this time around with the case of Health Secretary Francisco Duque.

Based upon the explanations of the veteran blogger Sen. Ping Lacson revealed last June 19, 2019 through official documents that PhilHealth Region 1 leases its office space from EMDC, a family-owned company where Duque is a major shareholder.

The lease contract between PhilHealth and EMDC shows that it was effective from 01 January 2018 to 31 December 2018. Duque was appointed Health Secretary in late October 2017 and as such became PhilHealth's ex-officio chairman of PhilHealth's Board of Directors.

PhilHealth and Duque himself admitted that the lease contract was renewed for another period spanning January 01 to December 31, 2019.

As far as I can see, PhilHealth’s defense of Duque over the assailed lease contract is unlikely to work.

Let me explain why but first, let me list down the facts:

1. Senator Panfilo Ping Lacson on 19 June 2019 revealed through official documents that Philippine Health Insurance Corporation Region I leases its office space from the EMDC, a family-owned company where Duque is a major shareholder [http://bit.ly/2L9smHl].

3. Duque was appointed Health Secretary in late October 2017 and as such became PhilHealth's ex officio chairman of PhilHealth's Board of Directors [http://bit.ly/2L9ss1F].

4. PhilHealth (and Duque himself) admitted that the lease contract was renewed for another period spanning 01 Jan 2019 to 31 Dec 2019.

5. PhilHealth insists that no conflict of interest exists because Duque's role as director is just policy-related and quasi-judicial [http://bit.ly/2L75zMg].

CONFLICT OF INTEREST = RESIGNATION AND DIVESTMENT

When a conflict of interest arises, [the Public Official] shall resign from his position in any private business… within thirty (30) days from his assumption of office and/or divest himself of his shareholdings… within sixty (60) days from such assumption.

The same law says "’Conflict of Interest’ arises when a public official... is a member of a board... or a substantial stockholder of a private corporation... and the interest of such corporation or business... may be opposed to or affected by the faithful performance of official duty."

A look at the Lease Contract shows that the contract, being in the amount of over P3 million, requires the approval of Philhealth’s President.

While PhilHealth argues that no conflict of interest exists as Duque’s chairmanship role is just policy-related and quasi-judicial, the fact is that PhilHealth’s President and CEO Roy Ferrer [http://bit.ly/2L9RVbg] reports directly to the Chairman and the Board of Directors, just like any other corporation [http://bit.ly/2La51p8].

Does PhilHealth and Duque honestly expect the public to believe that Ferrer can casually tell Duque, “Sorry, we’re not renewing our lease contract with you,” without any fear of reprisal?

Conversely, does Duque expect the public to believe that his decisions as a PhilHealth director are unaffected by how PhilHealth’s President may react, especially when the President has the authority to renew or terminate the Lease Contract?

From where I see it, this really looks like a conflict of interest, which should require Duque to resign from EMDC and divest his EMDC shares in early 2018.

Duque did neither, as EMDC’s latest General Information Sheet shows that Duque is merely “on leave” and he still owns a substantial number of EMDC shares.

In short, Duque neither resigned nor divested as may have been required under RA 6713.

While PhilHealth argues that they have no alternative option for PhilHealth Region 1’s office space, this reality did not prevent Duque from complying with RA 6713.

Violations of RA 6713 Section 9 are punishable with [1] at least 5 years of imprisonment, OR [2] a maximum Php 5,000.00 fine, OR [3] both, and, in the discretion of the court of competent jurisdiction, disqualification to hold public office
If convicted, it appears that Duque can get away a mere P5,000 fine, i.e. a slap on wrist.

The Code of Ethics for Public Officials also states that “If the violation is punishable by a heavier penalty under another law, he shall be prosecuted under the latter statute.”

Direct[ly] or indirectly having financing or pecuniary interest in any business, contract or transaction… in which he is prohibited by the Constitution or by any law from having any interest.

Duque has a direct financial interest in the Lease Contract, and with the assumption that that this is a conflict of interest per RA 6713… you connect the dots.

If convicted for violation of RA 3019 Sec. 3(h) in connection with RA 6713 Sec. 9, Duque will instead be imprisoned for up to ten years, perpetually disqualified from public office, and be required to reimburse the amounts EMDC received from PhilHealth since Duque became PhilHealth chair.

If that can actually be done, wouldn't that be fun?

Relatives of Dengvaxia victims on 21 June 2019 filed graft charges against Duque in relation to this lease contract. [http://bit.ly/2L9JJaW]

Let's see how far that case will go