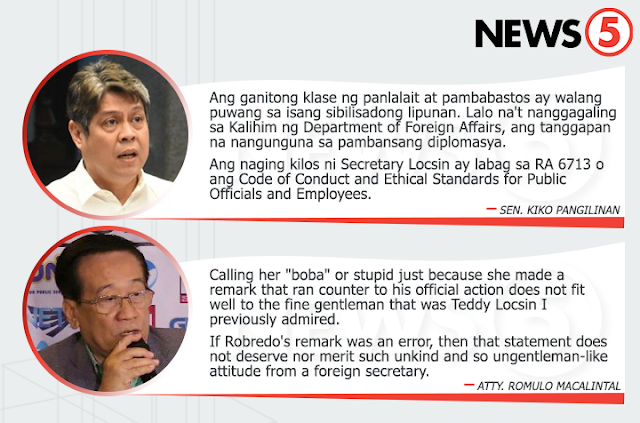 Sen. Kiko Pangilinan and Atty. Romulo Macalintal, one of VP Leni's lawyer in the election protest case filed against her by Sen. Bongbong Marcos, came to the rescue of the Vice President after she was ridiculed on social media for her alleged dumbness in the issue about diplomatic passports.

Atty. Macalintal on his part defended the Vice President by saying "Calling her 'boba' or stupid to his official action does not fit well to the fine gentleman that was Teddy Locsin I previously admired. If Robredo's remark was an error, then that statement does not deserve nor merit such unkind and so ungentleman-like attitude from a foreign secretary."

The defense of Sen. Pangilinan and Atty. Macalintal came under fire after most netizens commented in favor of Locsin and the statement made by the Foreign Affairs Secretary.

Facebook user Senyora on her criticisms with Pangilinan ang Macalintal reminded the two defender of VP Leni Robredo that if the same situations happened to the President, there is no issue on the code of conduct among public officials.

Read Some of the Comments by Netizens Against Pangilinan & Macalintal:

Robert Cabuhat: Boba now becomes a bomb. So many wanted to defuse for it to explode so that more may feast on it. Misconduct and unbecoming and also ethics and standard to a government official to respect co workers in the government. But by the way did Leni respected the DFA when she slammed the department's cancellation of diplomatic passports it had issued to former and inactive diplomats like ex SFA Del Rosario? With that what would be the best move the DFA have to take on Leni? Or in legality, what legal actions the department may file concerning Leni eventhough she is a VP.Just becoz she is VP she has an immunity for everything she might say? That's unfair to the DFA especially what the department is doing is based on previous decision that has been passed before.

Edwin Brinquis: Thank you so much Mr. Sec. T.Locsin, for telling the Truth that L. Robredo is BOBA, now she knows how the country branded her.