Posted by Phil Newsome on June 13, 2019
Veteran TV anchor and politica analyst Jay Sonza revealed some of the most interesting information he gathered about the real identity of Kapa Founder Joel Apolinario as he revealed that the revered Pastor was facing some serious crimes. 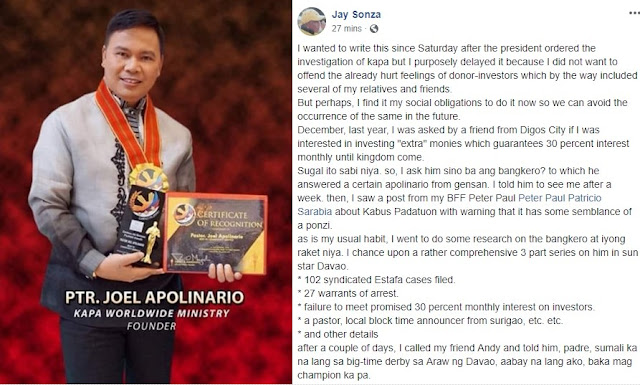 According to Jay Sonza he wanted to share the information he gathered about Pastor Apolinario, moments after Pres. Duterte ordered the investigation of Kapa but he purposely delayed his revelations because he did not want to offend the already hurt feelings of donor-investors which by the way included several of his relatives and friends.

The veteran journalist revealed that last December, he was asked by a friend from Digos City if he was interested in investing "extra" monies which guarantees 30 percent interest monthly until kingdom come, but it is a huge risk.

The news anchor asked his friend about the financier or the people who managed the investment but later on he discovered some interesting cases against Pastor Apolinario which include 102 syndicated Estafa cases, and 27 warrants of arrest.

I wanted to write this since Saturday after the president ordered the investigation of kapa but I purposely delayed it because I did not want to offend the already hurt feelings of donor-investors which by the way included several of my relatives and friends.

But perhaps, I find it my social obligations to do it now so we can avoid the occurrence of the same in the future.

December, last year, I was asked by a friend from Digos City if I was interested in investing "extra" monies which guarantees 30 percent interest monthly until kingdom come.

Sugal ito sabi niya. so, I ask him sino ba ang bangkero? to which he answered a certain apolinario from gensan. I told him to see me after a week. then, I saw a post from my BFF Peter Paul Peter Paul Patricio Sarabia about Kabus Padatuon with warning that it has some semblance of a ponzi.
as is my usual habit, I went to do some research on the bangkero at iyong raket niya. I chance upon a rather comprehensive 3 part series on him in sun star Davao.