Posted by Phil Newsome on May 21, 2019
One of the controversial agency during the previous administration, the Manila International Airport Authority (MIAA), which manages the country's main gateway, the NAIA, noted that its income has been increasing since the start of the Duterte administration, remitting a total of P3.42 billion dividends to the government. 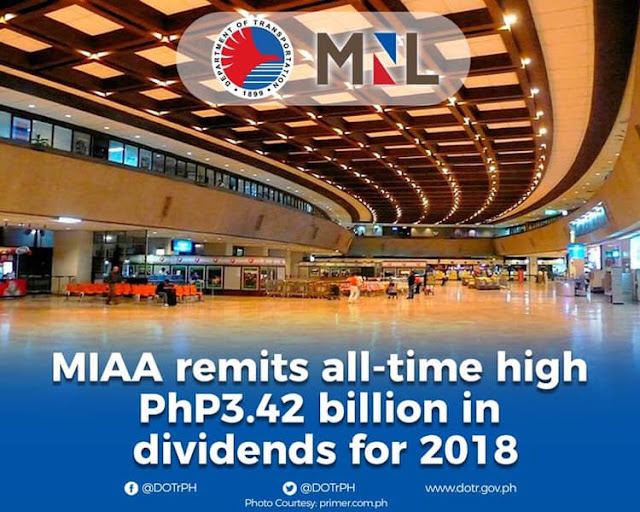 The P3.42 billion dividends of MIAA is considered as the agency's highest so far in terms of MIAA history.

During last year's period, dividend was at 50 percent higher compared to the 2017 dividend reports from MIAA.

MIAA, in a statement, said that its dividend payments have significantly increased since President Rodrigo Duterte assumed office in 2016.

The MIAA is required to remit at least 50 percent of its annual income to the national government.

Arlene Britanico, MIAA assistant general manager for Finance and Administration, told the Philippine News Agency (PNA) that the increasing income is due to increase in flights, passengers, additional concessions coupled with the strict implementation of the Point Of Sale system, imposition of variable parking rates at terminal as well as opening of additional parking areas.

MIAA have remitted the dividend to the Bureau of National Treasury last May 15.

Meanwhile, apart from the dividend, MIAA said it has also remitted PHP5.4 billion for the corporate income taxes and national government's share in gross revenues for the year 2018.