Netizen Asks: If Acierto is "Pakawala ng Kalaban, Who Are His Bosses?"

Posted by Phil Newsome on March 27, 2019
Veteran blogger and prominent supporter of Pres. Rody Duterte on social media Krizette Laureta Chu slammed the people supporting controversial cop, Eduardo Acierto because of the fact that if he's one one of the cops involved in the kidnapping and slay of Korean Jee Ick Joo then who are his bosses. 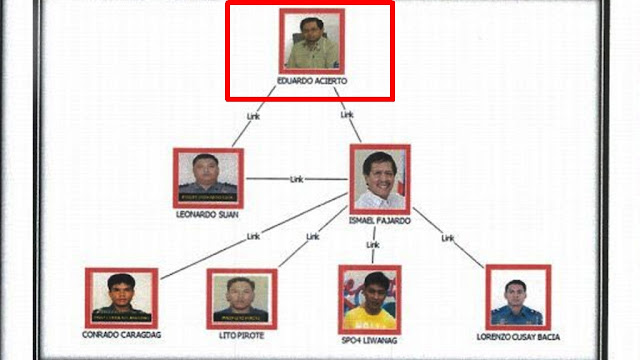 Krizette Chu asked some interesting questions about the personality of Col. Acierto, is he involved in other criminal activities and why do they have a battalion of criminal cops like Acierto and Lascanas at their disposal to always have 'drama' during convenient times.

The involvement of Acierto also signifies his bosses business, who are their main bosses and who is running the show. Krizette Chu also whether politicians or politicians backers are involved with the Chinese and Korean mafia, if any.

WAAAAAAAAIT. IMPORTANT. The President has said that Acierto is one of the cops involved in kidnapping and slay of Korean Jee Ick Joo inside Crame.

So if Acierto is one of the men na pakawala ng kalaban--are his bosses and colleagues also involved in the Jee Ick Joe slay? What other criminal activities are they involved in? And why do they have a BATTALION of criminal cops like Acierto and Lascanas (and plain criminals like Matobato) at their disposal to always have 'drama' during convenient times?

What is their business? Who are their main bosses? Who is running the show? What other criminal activities are they involved in, since inaamin nila selectively yung iba nilang krimen?

Which politicians or politician backers are involved with the Chinese and Korean mafia, if any?

How are some of our senators involved with Kenneth Dong? Duterte was asked to be a sponsor in a wedding WITH Peter Lim, yes, but he didnt know Peter Lim. He didnt ask Peter Lim to be a fellow ninong.

Some politicians like the Godmother were ASKED by the alleged drug lord himself. Why is Baste Duterte not in the entourage if he was close to them like the Godmother--who has received campaign contributions from Kenneth Dong many times.

Why do they need to paint Duterte as the bad guy?

Why is Aquino suddenly noisy recently when he has tried to hide himself the past three years to avoid being in the spotlight because of his many sins against the Filipino?

Why are they so desperate to kick an old man out? Why are they SO DESPERATE and just cannot wait their turn like others have waited their turn? Is Aquino their last baraha?

As Ocho Direcho plunges even further down the surveys, is this the playbook-- HAVE PRIESTS COME OUT SAYING THEY ARE THREATENED, HAVE A POLICEMAN COME OUT SAYING DUTERTE IS INVOLVED IN DRUGS, ETC?
I'm just asking. I have no proof. But like they always say when they accuse Duterte without proof, we have freedom to ask our questions.

Why the obsession, though?

Why are there so many unanswered questions that may not even be related to each other but then there are no coincidences in the world, are there?

WHO ARE THE REAL CRIMINALS?

WHY WERE THERE NO BIG DRUG BUSTS DURING THE AQUINO ADMINISTRATION?

WE HAVE NO SUPER MAJOR INFRASTRUCTURE BUILT DURING AQUINO TIME. Bakit ang laki laki ng utang under him (he had more utang than GMA, I believe), at anong ginawa niya with our taxes?

There's a HUGE iceberg, and we're only seeing the tip.