Atty. Tom Berenguer Burns Critics of the Boracay Closure and Proving them Wrong

Posted by Phil Newsome on October 28, 2018
Veteran lawyer and prominent social media personality, Atty. Tom Berenguer burned down all the critics of the Duterte administration after the President ordered the closure of Boracay Island six months ago. Most of the allegations thrown by the critics were proven wrong. 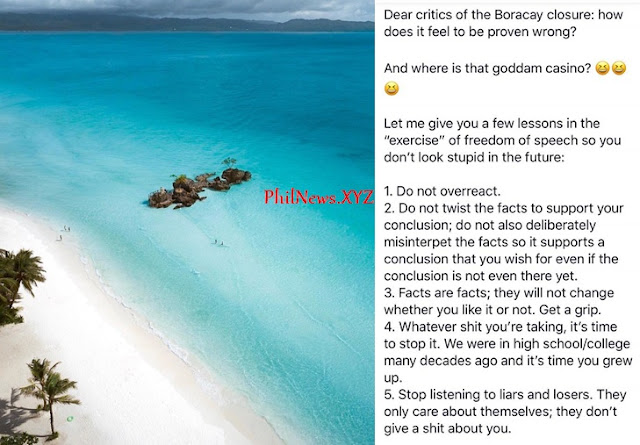 Some of the allegations according to the critics is the reported construction of a casino in Boracay as the main reason for the closure but all of these were proven wrong.

Atty. Berenguer then lectured the critics of the Duterte admin as he gave a few lessons in the "exercise" of freedom of speech so that they don't look stupid in the future.

The veteran lawyer advice not to overreact with Pres. Duterte's decisions; not to twist facts to support their conclusion; not deliberately misinterpret the facts so it supports a conclusion that they wish for even if the conclusion is not evn there yet.

Dear critics of the of the Boracay closure: how does it feel to be proven wrong?

Ang where is that goddam casino?

Let me give you a few lessons in the "exercise" of freedom of speech so you don't look stupid in the future:

1. Do not overreact.
2. Do not twist the facts to support your conclusion; do not also deliberately misinterpret the facts so it supports a conclusion that you wish for even if the conslusion is not even there yet.
3. Faacts are facts; they will not change whether you like it or not. Get a grip.
4. Whatever shit you're taking, it's time to stop it. We were in high school/college many decades ago and it's time you grew up.
5. Stop listening to liars and losers. They only care about themselves; they don't give a shit about you.