Posted by Phil Newsome on September 12, 2018
One of the country's most prominent social media influencer and a well-known Pro-Duterte supporter Thinking Pinoy made an interesting explosive expose regarding Trillanes relatives allegedly getting MRT-3 Contract Without Public Bidding which is worth around P7.28 million. 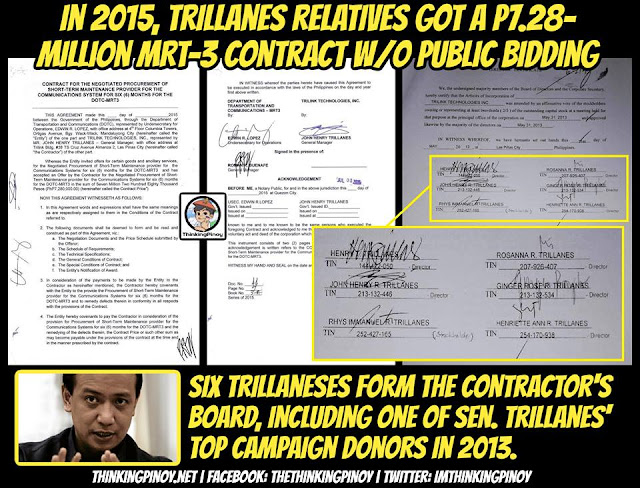 Thinking Pinoy claimed that he has all the evidences to support his allegations against the controversial Sen. Antonio Trillanes IV who is now holed up inside the Philippine Senate due to alleged fears of being arrested by authorities.

According to the information presented by TP, the Noynoy Aquino government in 2015 awarded without public bidding a P7.28-million MRT-3 Communications Maintenance contract to Trilink Technologies, whose general manager is Henry Trillanes, a relative of Sen. Antonio Trillanes IV.

Trilink Technologies documents presented by TP also showed that the board of directors is made up entirel of Trillaneses, which include Henry Trillanes, John Henry Trillanes, Rosanna Trillanes, Ginger Rose Trillanes, and Henriette Ann Trillanes as Directors, while Rhys Immanuell Trillanes served as a stockholder.

TP also presented a link to the official documents showing the said contract of the Trillanes Family with the government which is still available through the DOTC-MRT3 website. The veteran blogger also exposed that the director of Trilink Technologies, Henry Trillanes is one of Sen. Trillanes' top donors, having donated P3 million to the latter's 2013 senatorial campaign.

This is not the first time that the Trillanes families involvement with the MRT-3 Project was exposed because last June 2016, Jarius Bondoc of the Philippine Star already exposed the alleged anomalous transactions.

Documents also show that Trilink Technologies’ board of directors is made up entirely of Trillaneses, namely:

A copy of the notice of award for the abovementioned contract may also be found in the DOTC-MRT3 website. To see the document, visit this link: https://bit.ly/2MlTQ9z

Henry Trillanes, one of Trilink’s incorporators, is also one of the senator’s top donors, having donated P3 million to the latter’s 2013 senatorial campaign.

Should the Ombudsman check if the contract complies with the Government Procurement Reform Act?

After all, negotiated contracts, or contracts that do not involve public bidding, have clear-cut guidelines under Article 53 of the said act [https://bit.ly/2QpW8rk].

This issue was first mentioned by Philippine Star's Jarius Bondoc in his June 2016 column "Trillanes kin got MRT-3 contract" [https://bit.ly/2QnP5Q3], although I believe this post is the first instance where supporting documents have been made public. — at Office of the Ombudsman Philippines.