Posted by Phil Newsome on September 23, 2018
Former Presidential Assistant for Food Security and Agricultural Modernization (PAFSAM) Sen. Kiko Pangilinan got the ire of netizens anew for his statement and suggestions for the Duterte administration, with regards to the problems of rice shortage in the country. 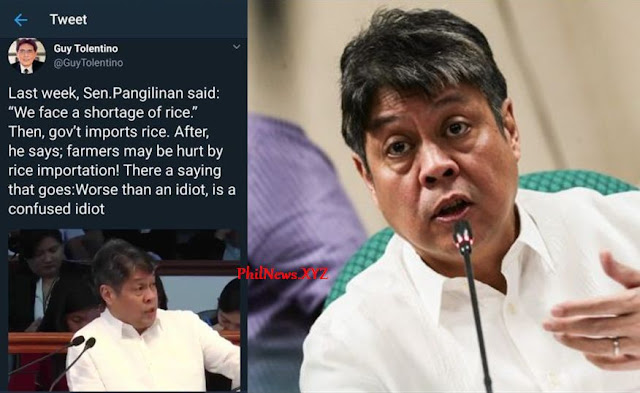 Last week, Sen. Pangilinan said: "We face a shortage of rice." Then. the government imports rice, but after the decision to import rice, Sen. Pangilinan speaks up against the decision of importation by saying that "farmers may be hurt by rice importation!" This is the reason why netizens were now attacking the senator who placed 9th during the 2016 national elections.

Netizens were confused with the decision of Sen. Kiko Pangilinan for criticizing the importation of rice because in the first place he was one of those who criticized earlier the shortage of rice so there's indeed a need for importation.

Former Pres. Noynoy Aquino appointed Kiko Pangilinan to Cabinet-Level Agriculture Post, the residential Assistant for Food Security and Agricultural Modernization (PAFSAM), which is under the Office of the President. It was created on May 5, 2015 by Pres. Noynoy Aquino.

Pres. Aquino through an executive order transferred the National Food Authority (NFA), National Irrigation Administration (NIA), Philippine Coconut Authority (PCA), and the Fertilizer and Pesticide Authority (FPA) from the Department of Agriculture (DA) to the Office of the President.

Here's Some of the Comments Against Pangilinan: