Posted by Phil Newsome on September 13, 2018
Election fraud expose hero, Atty. Glenn Chong made headlines anew on social media as he revealed some instances wherein the Commission on Election allegedly doctored the voting results of the 2016 national elections. Atty. Chong enlightened netizens about the discrepancies of votes that were transmitted compared to those that were recorded. 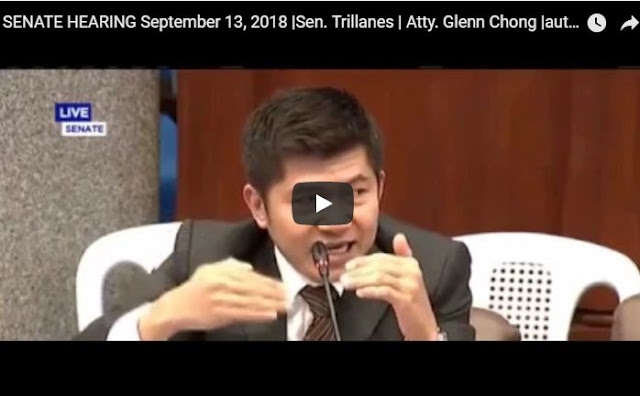 During the Joint Congressional Oversight Committee Hearing on the automated election system, the veteran lawyer and former Biliran Congressman explains the importance of making sure that the number of people who voted, should be the same number once compared to the final report, but apparently in the 2016 election results, that was not the case.

Atty. Glenn Chong made a perfect analogy of the incident and in his attempt to make ordinary people understand the election problem better, the veteran lawyer explains that if there are six (6) people, 5 of which were having a normal height while the remaining one is a midget that comes in, they should also be the one who comes out, and not just two persons only.

The discrepancy according to Atty. Chong was at 342,082 votes. Atty. Chong reiterated the importance of these two number or results because it should be the same, for they came from one server only. The source sent two results to the recipients and the reports did not tally.

When asked for further clarification, Atty. Chong revealed that the transparency server data was taken on May 10, at around 12nn, while the official COMELEC results were reported after May 10, 2016.

During the said Senate Hearing, Atty. Chong made some small jest by saying that he still wanted to reveal some discrepancies about the automated election because he doubt he will be allowed to be given another chance to speak or maybe he can wait for another year to make such expose about the COMELEC.

Atty. Chong also revealed that at least 200,000 discrepancy from the file that was transmitted to all the board of canvassers compared to the final tally that the COMELEC reported. Both discrepancies that he mentioned all changed their data when it comes to the final tally report of the Commission on Elections.