Posted by Phil Newsome on September 13, 2018
Former rebel soldier leader and prominent leader of the Oakwood Mutiny and the Manila Peninsula Siege, Nicanor Faeldon who now served Civil Defense Deputy Administrator showed how brave he is as he expressed willingness to return jail amid questions on the amnesty awarded to former rebel officers by the Aquino administration. 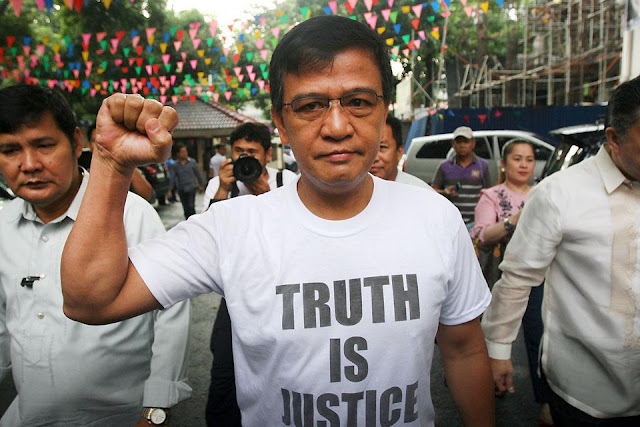 “Sa akin, I’m willing to go back to jail. Let’s just follow the process if the process we have gone through is not in accordance with the Constitution,” Faeldon told reporters during an event organized by PDP-Laban.

Deputy Administrator Faeldon answered questions by the members of the media after his oath taking as a member of the Partido Demokratiko Pilipino-Lakas ng Bayan (PDP-Laban).

Faeldon also noted that "Let's all go back to jail and restart the process," he said, adding that he had been jailed six times already.

The former Customs Commissioner agreed with the decision and argument of the Palace that it should be former Pres. Noynoy Aquino who signed the amnesty and not former Defense Secretary Voltaire Gazmin.

"Because the President (Duterte) has raised the issue, it’s the act of the State, so dapat hindi siya dinelegate sa Secretary. So dapat siya (Aquino) ang pumirama. So if it will be revoked, ako I am very willing to go back to jail so that we pass through the process, wala yun problema sa akin,” Faeldon said.

“After seeing the cards of both parties naging maliwanag din sa akin na may problema talaga. If we all agree that act of pardon and amnesty is act of the State and it cannot be delegated to another official except the President, then may problema talaga. So I’m willing to go back to jail and start the process again,” he added.

The OCD deputy administrator also expressed belief that those who have been granted amnesty should follow the correct process. "Ako I’m very willing. I can’t speak on behalf of the rest, but as far as I’m concerned I can go back to jail tomorrow or now. Because if the process is void, e bakit hindi natin sundin ‘yun? We cannot act above the law,” Faeldon said.

With regards to following the needed requirements for amnesty, he said that one of the requirements then was the attachment of an affidavit admitting specifically identified offenses which he complied with. Faeldon was quoted as saying "So attachment po ‘yung affidavit of admission of guilt. I believe we all come up with our application form, but I do not know how many submitted that affidavit of admission of guilt,” Gaeldon said.