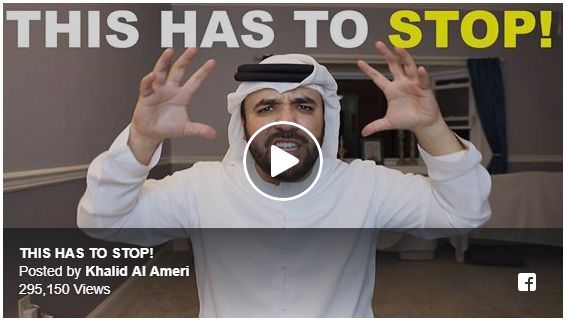 The Kuwaiti social media star Sondos Alqattan made headlines on social media after she posted a complaint on social media about Filipino workers getting a day off and not surrendering their passports to their employers while working in Kuwait.

Sondos Alqattan was quoted as saying "How can you have a 'servant' in your house who gets to kept their passport with them," "If they ran away and went back to their country, who'll refund me? Honestly, I disagree with this law. I don't want a Filipino made anymore," Sondos Alqattan said.

According to Khalid Al Ameri, the popular UAE Blogger with more than 1.2 million followers on Facebook and well-loved by the Filipino community in the UAE, responded to the video statement of Sondos Alqattan by defending the Filipinos from the attack of the popular Kuwaiti social media personality.

The popular UAE Blogger Khalid Al Ameri stated on his latest video that someone tagged him in a video of a celebrity complaining about new labor laws that protect the rights of domestic workers in Kuwait, namely that they should be given a day off and that they should hold their passports at all times. Watching the video made Khalid pretty upset and admitted he hate that he still have to make videos about topics like that in 2018.

Khalid Al Ameri is an Emirati opinion writer and social commentator with The National on issues such as employment, entrepreneurship, and social development in the Arab region.

Khalid has recently returned from completing his MBA at Stanford University, and is currently working with youth on education and employment readiness, as well as continuing his work on highlighting social issues we face in our day-to-day lives through his column with The National newspaper.