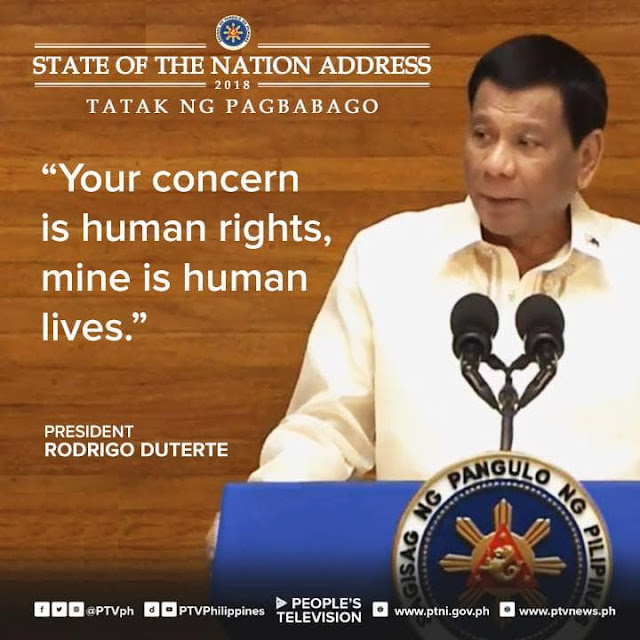 The concerned netizen Xan Toledo aka Pusang Makata, made a summary of Pres. Duterte's Third SONA, resulting to thousands of netizens appreciating his efforts, because it would easily helped them to understand what really the President delivered during his latest SONA.

Most Senior High School and College Students were tasked to make a summary out of the President's SONA as well as giving their own version of Reaction Paper and the summary presented by Toledo greatly helped them understand the topics presented by Pres. Duterte.

As of posting time, Xan Toledo's post was already Liked by more than 41K, Shared by 60K users and more than 8.7K people commented on the said accurate summary of Pres. Duterte's SONA.

1. Your concern is human rights, mine is human lives.
2. Stolen wealth does not make the thief respectable.
3. You worry about the present. I worry about the future.
4. Justice will catch up with those who steal public funds.
5. I value friendship, but it has its limits. This is a lonely place I am in. Do not make it lonelier by forcing me to end by giving me reasons to end it.
6. Duterte says government improving delivery of services, orders agencies to faithfully implement ease of doing business law.
7. Duterte delivers ad libs, slams
"lousy, corrupt bureaucracy".
8. Duterte says he has fired several officials tagged in corruption.
9. I value friendship but it has its limits.
10. Duterte vows to sign Bangsamoro Organic Law within 48 hours after its ratification.
11. On Bangsamoro Organic Law, Duterte: Give me 48 hours to sign the law. Babasahin ko pa bago ko pirmahan, baka may siningit kayo diyan.
12. War is not an option.
13. We will continue to assert independent foreign policy.
14. We will continue to reach out with other nations.
15. Duterte says Phl to seek stronger bonds with fellow ASEAN countries.
16. He ask Congress to pass legislation to end contractualization once and for all.
17. I urge Congress to pass bill establishing coconut farmers' trust fund.
18. Read my lips. I understand this does not satisfy all sectors. I share their sentiment. I truly do. Much as I would like to do the impossible.

19. My admin remains firm in its resolve to ensure the PH's telecom services are reliable, inexpensive, and secure.
20. We shall lower interconnection rates between industry players.
21. SAP Bong Go instrumental in establishment of Malasakit Centers nationwide.
22. I could not allow decay of Boracay to continue and we intend to restore environmental integrity of Boracay.
23. I urge local govt units to actively enforce laws and not wait for us to swoop down on you areas just to do your duties and work.
24. I urge Senate to urgently pass the National Land Use Act to put in place national land use policy that will address our our competing land requirement for food, housing, business and environmental conservation.
25. We must learn from Typhoon Yolanda and other disasters.
26. We in Cabinet have approved for immediate endorsement to Congress for passage of law creating Department of Disaster Management.
27. To the mining industry; do not destroy the env't or compromise our resources, repair what you have mismanaged.
28. I fervently appeal to Congress to pass this bill in utmost urgency. Our people's safety requirement cannot wait.
29. Duterte says to 'defend' Philippine interests in South China Sea.
30. Some have incorrectly blamed our efforts toward fairer tax system for all the price increases. We need TRAIN Law for sustainable growth that leaves no Filipino behind.
31. I ask businesses to cooperate with us in stabilizing rice prices.

32. I direct all intel agencies to unmask those behind economic sabotage.
33. We need to lower price of rice.
34. I am committed to a comprehensive tax reform and I ask Congress to continue the job.
35. I promised to give Filipinos a comfortable life even if it means fighting interests.
36. I hope to sign TRAIN Law package 2 before the year ends.
37. By the end of July 2018, all packages of my tax reform would have been submitted to Congress; aside from TRAIN, rice tariffication, too.
38. One of the most impt thrusts of this govt is to cover all Filipinos against financial health risk.
39. We're currently institutionalizing the unified implementation of No Balance Billing policy.
40. Much needs to be done to improve health care system, which remains highly fragmented.
41. While investments in health have increased over the past several years, several policy and operational bottlenecks have constrained universal healthcare in the Ph.
42. I urge speedy passage of universal health care bill.
43. I have no illusions of occupying this office one day longer that what Consti permits.
44. I thank consultative committee on charter change for crafting draft federal consti.
45. I am confident Filipinos will stand behind us in push for charter change.
46. I will not bore you with a list of projects completed.
47. If I complete my term, God willing, I would have served gov't for 40 years.

Ps. Short but sweet.
Me was like: Si Duterte ba talaga iyon. Lul