Posted by Phil Newsome on April 06, 2018
In the Day 4 of the manual recount for Camarines Sur in the controversial Vice Presidential Race between Sen. Bongbong Marcos and VP Leni Robredo, an FB Page Bagong Lipunan claimed that once the votes of VP Leni could not reached 359,179 votes, she will surely lost even if BBM could get a zero vote. 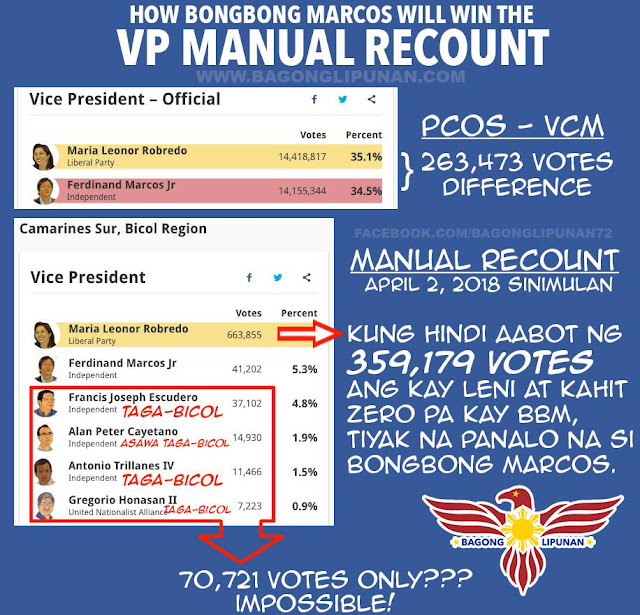 The Bagong Lipunan FB Page, a pro-Marcos pages which was more than 50K followers on Facebook also noted that this is the main reasons why the Dilawans allegedly resort into "wet ballots."

The results of the manual recounts in Camarines Sur is very important to the Marcos camp because VP Leni got a controversial 663,855 votes in Cam Sur alone compared to the much lower votes generated by his opponents who were prominent politicians in Bicol, such as Chiz Escudero, Alan Peter Cayetano and Gringo Honasan.

The total votes of the Bicol politicians in Cam Sur only totalled to 70,721 which are indeed impossible.

Bagong Lipunan explained that once VP Leni could not reached at least 359,179 votes in Cam Sur, because more than 663,000 is indeed impossible to achieve.