Posted by Phil Newsome on April 08, 2018
Secretary Arthur Tugade of the Department of Transportation (DOTr) considered as one of the most active Cabinet Member of the Duterte administration, has ordered the relief of personnel and employees of the Land Transportation Office (LTO) assigned in Nueva Ecija over alleged extortion activities with some of them allegedly earning P1-Million per day. 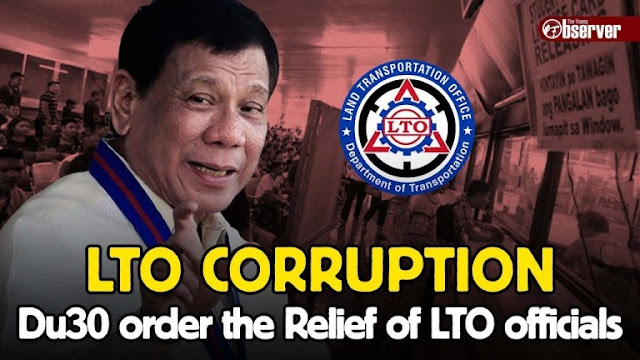 The order of the DOTr Secretary came after Pres. Rody Duterte received some verified complaints during his meeting with rice stakeholders last week, some of the rice traders and truckers reported that there were LTO personnel from Nueva Vizcaya, extorting money from traders.

The DOTr through Sec. Arthur Tugade has ordered the relief of officers and personnel of LTO's district office in Bayombong and extension office in Aritao in Nueva Vizcaya.

Some rice traders claimed that several LTO personnel from the province earn as much as P1 million a day from over a thousand trucks from Cagayan Valley bringing agricultural products out of the region.

The decision of the DOTr was also approved and supported by LTO Chief Edgar Galvante as the LTO chief noted the relief of personnel in Nueva Vizcaya is just part of the government's actions to curb corruption in the Philippines.

According to the DOTr and LTO, a new set of officials and employees have been designated in acting capacities to take over the operations of LTO in Nueva Vizcaya.