Posted by Phil Newsome on April 25, 2018
President Rody Duterte once promise that he will do everything to put the Philippines in the world  map in terms of infrastructure development and one of the project that is nearing completion is the P296.5-Million Seawall in Pasay City. 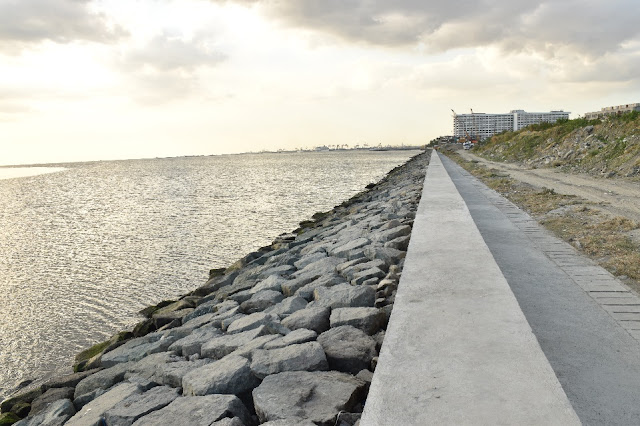 The Department of Public Works and Highways (DPWH), in the hopes of reducing coastal hazard at Manila Bay, the Duterte admin is restoring the 937-lineal meter seawall at the back of Cultural Center of the Philippines (CCP) and along Diokno Boulevard in Pasay City.

Director Melvin B. Navarro of DPWH-NCR said that with a total budget allotment of P296.5-million, the seawall project involves the construction of a protective seawall reinforced with steel bars that will absorb and lessen the force of waves and deflect the water towards the sea. It also involves the installation of storm drains and positioning of armour rocks.

The DPWH noted that Six (6) of the seven (7) phases of the P296.5 project were completed with the remaining phase of 80 lineal meters to be constructed and be finished before the rainy season.

The seawall will serve as protection of Manila Bay from storm surge during occurrence of typhoon. Seawall pathways will also serve as easy access to tourists mesmerized by the famous Manila Bay sunset.

The DPWH under the leadership of Secretary Mark Villar also noted that a jogger's lane which is now starting to become a component of DPWH projects was likewise included in the Pasay Seawall project to encourage fitness and wellness activities for local Manila residents and tourists since the place is also a site for sporting events like triathlon, marathons, cycling, and fun runs.