Posted by Phil Newsome on March 24, 2020
Senate President Vicente "Tito" Sotto III said in an interview with the media that they're not going to allow the President of the Republic to control privately-owned utility companies amid the rumors that the chief executive is asking emergency powers to Congress to address the COVID-19 outbreak. 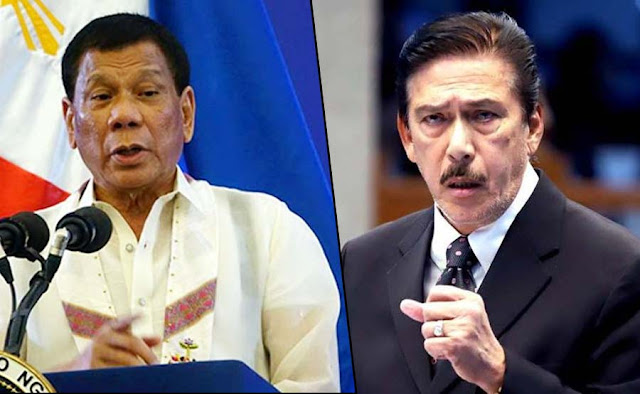 The Senate President denied that Pres. Duterte is asking emergency powers as reported earlier by various news outlets, but confirmed that there's a provision that giving Pres. Duterte to control the privately-owned businesses like utility companies and hotels.

Sen. Sotto was quoted as saying "Not true. Read the title. Nothing there says emergency powers," Sotto said.

Perhaps one controversial provision in the bill [is] about the takeover of businesses but that won’t fly in the Senate. The main proposal of the bill is to distribute cash to the 16.5 million families badly needing help," he added.

The veteran lawmaker revealed that their meeting on Saturday already  decide that they're not going to pass any measure giving the President emergency powers.

Based upon the still-unnumbered Senate bill which Pres. Duterte certified as urgent, the President is granted authority to "exercise powers necessary and proper" to implement a unified national policy to combat COVID-19 "for limited period and subject to restrictions."

The said bill includes temporary control of the President to some privately-owned companies. Pres. Duterte could also order speedy procurement of goods, medicines, medical supplies, and establishments that could be used as temporary medical facilities.

Meanwhile, in the Lower House of Congress, House Committee on Ways and Means chair Joey Salceda said that they're going to support granting the President emergency powers because it's "necessary."

"It’s absolutely necessary at this point. That’s why I asked Congressional leaders to call for a virtual session of Congress last week. The country needs it," Salceda said.

"I will especially support provisions to exempt the purchase of necessary medical supplies and other essential goods from the procurement law, as well as support for our frontliners. Subsistence allowances will also be given to poor families affected by the enhanced quarantine through these powers. I already proposed that a few days ago, so I am thankful that the government is adopting the approach," he added.