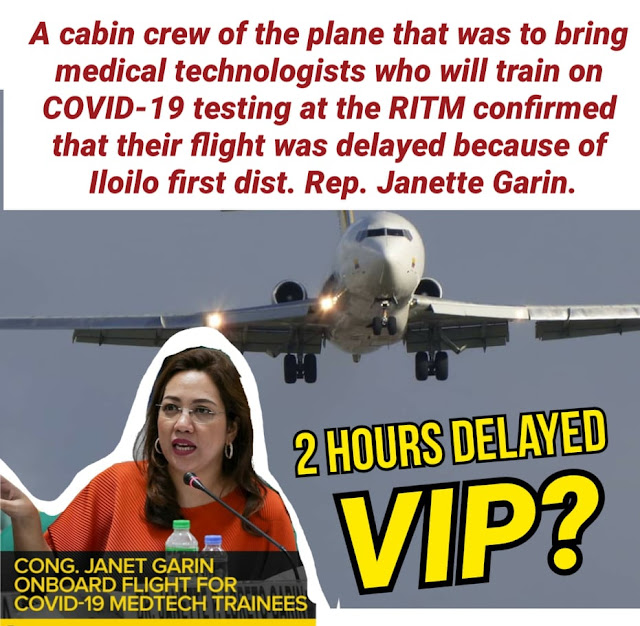 According to the information provided and reported by local news outlet, The Daily Guardian, a cabin crew of the plane that was to bring medical technologists who will train on COVID-19 testing at the Research Institute for Tropical Medicine confirmed that their flight was delayed because of Rep. Garin.

Cabin crew Cheska Lim told the Daily Guardian that they were supposed to fly out of Iloilo around 2 PM on Sunday but Rep. Garin asked them to wait for her.

The flight was then moved to 4 PM and by that time the med techs refused to fly with her because she was supposed to be on quarantine as she had just arrived from Manila on the same day.

Only two medtech from Western Visayas Medical Center were able to fly out along with Rep. Garin and her staffers.

The six-seater plane was also loaded with swab samples from suspected COVID-19 cases from Western Visayas.

Netizens reacted with the said news report posted by the Daily Guardian as they bombarded the congresswoman who was also previously involved in the controversial Dengvaxia vaccine during the time of former Pres. Noynoy Aquino.

Read Some of the Comments Against Rep. Garin:

Viole Olive Tree: Why she has to fly with this Medtech personel..and asked to wait for her and she knows time is more important than her .. what she think of herself.. VIP.. yuukksssss

Lovely Ibañez: Isnt there a 50k fine and upto 6 months imprisonment for those who do not comply the 14 days quarantine?

Lilian Ngo: Feeling priviledge. Airline should hv left her. Take off without her. There is a CAB ruling for such delay.

Brielle Madera M: "Janet Garin, you had failed the country!" Let me judge you, and give you the punishment you deserve for being one of the failures this country has! - THE GREEN ARROW (OLIVER QUEEN)

Generoso Laput Juanitez: Medtech personnel are more important than this elected politician. Some politicians are now shedding their true colors in these times of crisis. The good, the bad & everything else in between.

Sisinio Juban: Why this very desastrous clithead feels so important? Maybe she's a queen only in her province but not on national importance flight similar to that. Can I slap her?