Posted by Phil Newsome on February 02, 2020
The Vice President of the Philippines made headlines anew on social media after she was exposed on Facebook for her alleged credit-grabbing activities as he claimed to be part of the Operation Smile mission in Cebu. 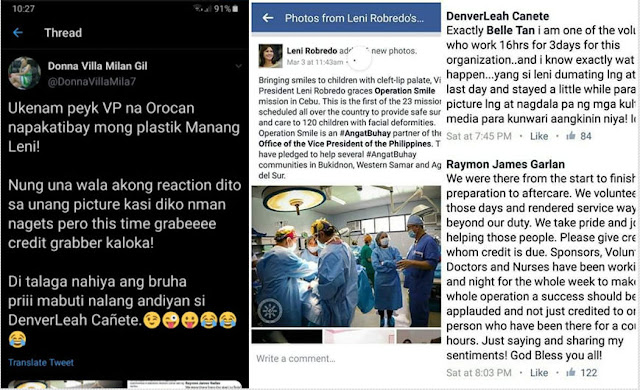 VP Leni claimed on social media that she brought smiles to children with cleft-lip palate as she claimed that this is the first of the mission scheduled all over the country to provide safe sure care to 120 children with facial deformities.

The claimed of the Vice President was exposed by some netizens as one of the commenters on the FB post that they were from the start to finished on their Operation Smile project.

According to netizen Raymon Garlan, they volunteered those days and rendered service way beyond their duty. They take pride and joy helping those people as they asked to give credit to whom credit is due.

The concerned netizen revealed that sponsors, volunteers, doctors and nurses have been woring day and night for the whole week to make the whole operation a success should be applauded and not just credited to one person who have been there for a couple of hours.

Nads Cervantes revealed further that the picture posted by Leni Robredo was taken from a group of doctors and nurses who planned for almost a whole year to conduct free cleft plate surgeries for kids.

It took almost a year for volunteer doctors and nurses to synchronize their leaves of absence. Leni came in unannounced and after a short almost one hour just observing asking questions, her post afterwards claimed that as project of her angat buhay. The doctors/nurses team of course reacted differently. It earned a buzz about a year and a half back.

Netizens also reacted on the said expose regarding the alleged credit-grabbing activities of the Vice President.

Here's Some of the Comments Posted on Social Media:

Danny Chan: The number one liar in the fake vp will do anything to grab credit just to ask for more budget ! So pathetic !

Mac Derrick: That's her forte, to gain media publicity! What a shame!