Posted by Phil Newsome on August 18, 2019
A former scholar and athlete of the Mindanao State University (MSU) turned NPA rebel showed some proof during a Senate Hearing that the militant group Gabriela, League of Filipino Students (LFS) and Anakpawis were connected with the terrorist group, the New People's Army (NPA). 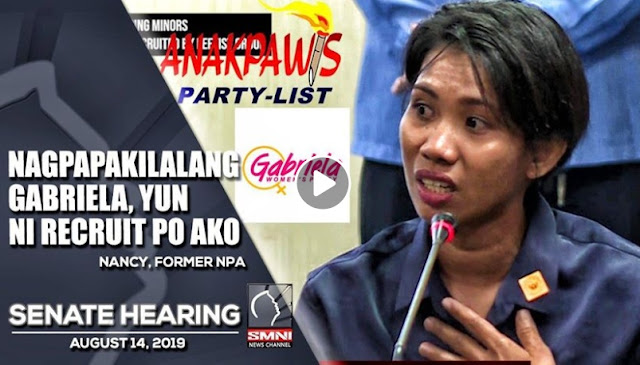 According to Alias Nancy, a self-confessed member of the New People's Army in Bukidnon, she was first recruited by the party-list group Gabriela and the League of Filipino Students (LFS) when she was a student athlete of the Mindanao State University (MSU).

Sen. Ronald "Bato" dela Rosa is one of the lawmaker who conducted the Senate hearing to investigate the missing minors who are allegedly recruited by the leftist group.

The former athlete and activist revealed that she was brainwashed by the activists by using her emotional experience with one of her relatives who nearly abused her during her younger days.

See Also: Watch the Real Plans of the Leftist Organizations against Duterte

Alias Nancy told the all those who attended the Senate Hearing that she worked as an activist and member of the legal front of the NPA for three years and even went to the mountains with NPA rebels for eight months.

The revelations made by Alias Nancy is another proof that the leftist organizations such the Anakbayan, Gabriela, League of Filipino Students and Anakpawis were connected with the National Democratic Front and the New People's Army.

The ex-rebel also revealed that during the time when she was with the activist group and the NPA, they were indoctrinated that in this world, God doesn't exist as they were told about the Big Bang Theory.

Watch the Video of Alias Nancy:

She also noted further that during her early days as an activist they were eager to joined the leftist movement and really forget their families as they wanted to live with their own lives together with their fellow activists.