Posted by PhilNewsXYZ on August 13, 2019
Prominent lawyer and defender of Pres. Rody Duterte on social media, Atty. Trixie Cruz-Angeles lectured Vice President Leni Robredo on her alleged off the mark remarks regarding the Chinese-operated POGO Online Gaming operations in the country. 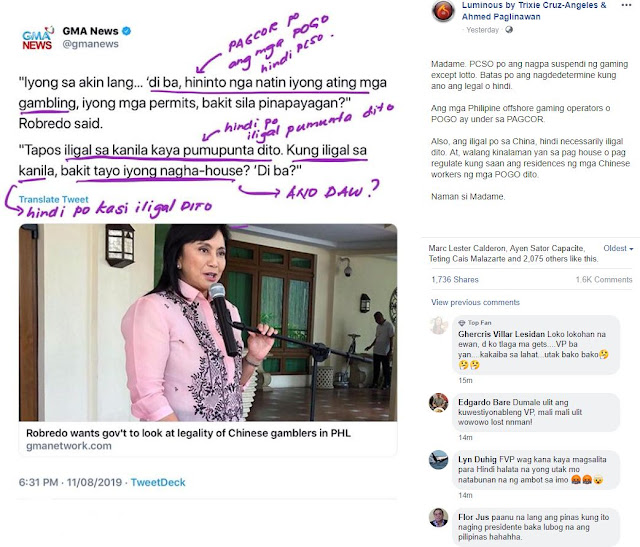 VP Leni Robredo wondered about the operation of POGO (Philippine Offshore Gambling Operation) in the country involving Chinese nationals, why they persist when Pres. Duterte has already ordered the shut down of all gambling operations in the country, including the revocation of permits.

The Vice President also reckoned that offshore online gaming is already illegal in China, so why they come to the Philippines to operate.

The statement of the Vice President was ridiculed by netizens particularly Atty. Trixie Cruz-Angeles who demolished VP Leni's statement on Facebook.

Atty. Angeles explained to the Vice President that it was the PCSO who ordered the suspension of all gaming except lotto. Angeles added further that it's the law that determines what is legal or illegal. The lawyer noted that POGO is under PAGCOR, not PCSO.