Posted by Phil Newsome on June 22, 2019
KAPA Members from different parts of the Philippines and even those in overseas territories urged their founder Pastor Joel Apolinario to run for President in 2022 because they believed he is the only answer to solve the poverty problems of the Philippines. 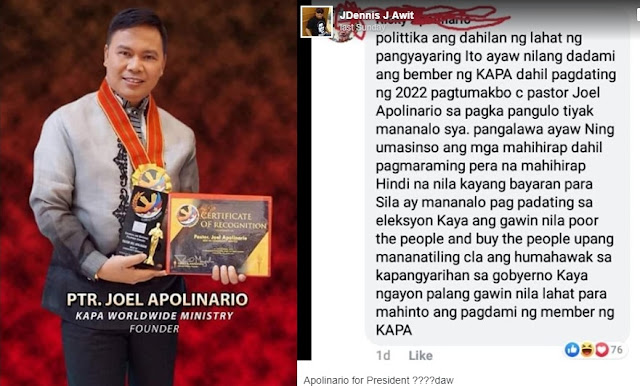 After the controversial closure of KAPA by the NBI and the Securities and Exchange Commission, thousands of supporters of KAPA Family Ministry International Incorporated joined hands in various prayer rallies nationwide as they also called the attentions of Pres. Duterte not to stop the operation of KAPA.

KAPA Members claimed that despite the closure of KAPA operations they will remain loyal to their founding leader, Pastor Joel Apolinario as they noted that they were even ready to support him if he wanted to lead the country in 2022.

Some KAPA Members even claimed that their various prayer rallies across the country could be comparable to the political rallies conducted by Pres. Duterte during the 2016 presidential race.

They believe that Pastor Apolinario is the right answer to solve the increasing poverty problems in the country today as he already proved himself to worthy of admiration as he helped many poor people via KAPA.

Read Some of the Comments on Social Media: 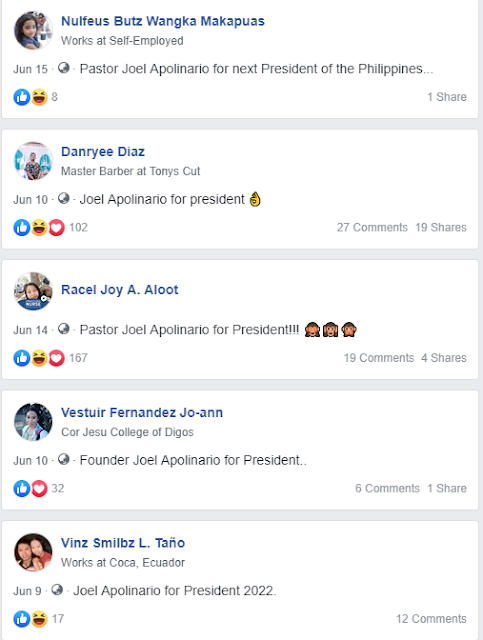 Pastor Joel Apolinario did not issue any comments regarding the call of his members for him to run for President in the country because he is still securing his life due to some death threats he received.

According to the Securities and Exchange Commission, KAPA already made P50-Billion by luring people to invest in their religious group in exchange of 30% monthly interest. The group did not used the term investment and interest but they are using the term donations and blessings for all monetary transactions.