Must Watch: Bong Go Takes Off Shirt to Prove He Has No Tattoo

Posted by Phil Newsome on April 10, 2019
Former Special Assistant to the President (SAP) Bong Go, one of the leading contender in the senatorial candidates this coming May 2019, takes off his own shirt during a press conference to prove he has no tattoo. 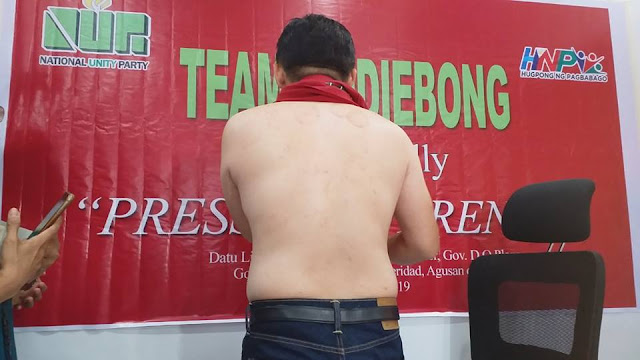 The senatorial bet and one of the endorsed candidate of Pres. Rody Duterte takes off shirt to prove he has no tattoo which allegedly establishes his links to the drug trade.

During a speaking engagement with some reporters, SAP Bong Go took off his shirt and wore a jersey bearing the number 34, his number in the ballot for the senatorial race.

The closest aide of Pres. Rody Duterte came out clean after he was involved in a controversy when a YouTube video titled, "Ang Totoong Narco List - Episode3" claimed that drug money is allegedly funneled into Go's bank accounts.

The information involving Bong Go came from a certain "Bikoy," who claims to be a former record keeper of a narcotics ring operating in Southern Luzon and Visayas. Bikoy claimed that Bong Go has a dragon tattoo on his back supposedly containing the alphanumeric code of his drug transactions.

Bong Go said that the video implicating his name was clear black propaganda against him and the administration. He said Bikoy will meet his karma one day.