The senatorial bet of the Liberal Party, Lorenzo "Erin" Reyes Tañada III is a Filipino lawyer broadcaster, and human rights and labor rights advocate who has served as a Deputy Speaker of the Philippine House of Representatives.

Erin Tañada made headlines when he posted a commetary on social media about the decision of Pres. Rody Duterte to field military officers to the BOC in order to solve the rampant problems of corruption inside the agency.

The LP senatorial bet posted: "I wonder how many employees of the Bureau of Customs were killed or have died for Malacanang to have declared 'a state of lawlessless' & 'state of lawless violence' in the BoC. Is the BoC paralyzed & not functioning? It is UCONSTITUTIONAL! NO to MILITARIZATION of BOC!"

The statement of Tañada caught the attentions of DFA Secretary Teddy Locsin Jr. who is also very active on Twitter as he burned down Tañada and lectured the veteran lawyer and lawmaker.

Sec. Locsin tweeted "Erin. Militarizing the BOC means ending 70 years of ordinary corruption civilian monopoly of the bureau. Now we shall try what is still essentially a civilian takeover because soldiers are still civilians but with iron spines and a lot more integrity." Locsin responded to Tañada's tweet.

Netizens also responded to the controversial statement of Erin Tañada as they slammed the LP-alligned lawmaker for his statement against the President's decision on how the handle the crisis inside the BOC which is under his command as the country's chief executive.

Here's Some of the Comments Against Tañada:

Norwin Lachica Dela Cruz And going by the same argument, why is your ilk filing those stupid cases at the ICC--have our courts stopped functioning and unable or unwilling to try cases against so-called EJKs??? Sagot, Erin, nang malaman if you have even a tinge of Lorenzo Tañada's esteemed principles in your veins or that you're just a mere pawn of your LP principals!!!

Genevieve Icawalo Ortiz His last name is the only thing he has going for him. Other than that, nada. Just like Pnoy, Diokno, etc. Nabuhay sa pulitika dahil sa patay.

Jerome Patagnan if youre raising an issue without offering a solution youre just simply a nuisance. 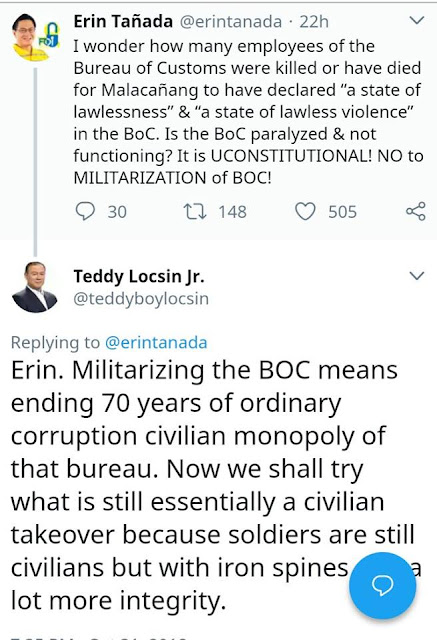