Posted by Phil Newsome on September 19, 2018
One of the country's most popular Facebook Page who is critical to the previous administration of Pres. Noynoy Aquino, Showbiz Government who is now a supporter of Pres. Duterte slams Sen. Bam Aquino for showing concerned over farmers but during the time of Aquino he was so silent with regards to farmers plight. 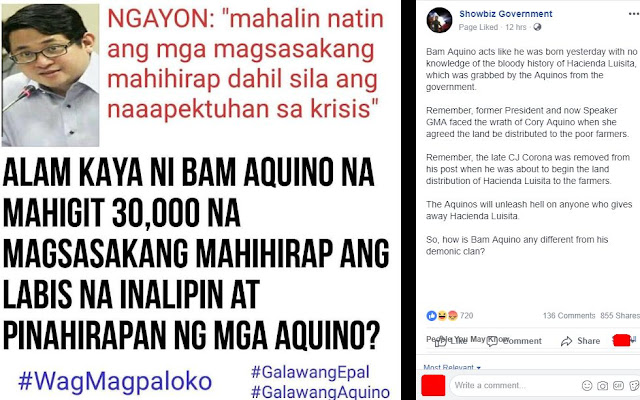 Showbiz Government lambasts Sen. Bam Aquino for acting like he was born yesterday with no knowledge of the bloody history of Hacienda Luisita, which was allegedly grabbed by the Aquinos from the government.

Bam Aquino acts like he was born yesterday with no knowledge of the bloody history of Hacienda Luisita, which was grabbed by the Aquinos from the government.

Remember, former President and now Speaker GMA faced the wrath of Cory Aquino when she agreed the land be distributed to the poor farmers.

Remember, the late CJ Corona was removed from his post when he was about to begin the land distribution of Hacienda Luisita to the farmers.

The Aquinos will unleash hell on anyone who gives away Hacienda Luisita.

So, how is Bam Aquino any different from his demonic clan?