Miriam's Sister Slams VP Leni: "Robredo Should be Sanctioned by Courts for Commenting on a Pending Case"

Posted by Phil Newsome on September 26, 2018
The sister of the late Sen. Miriam Defensor-Santiago, who is also a veteran international lawyer, Atty. Paula Defensor-Knack slammed the Vice President of the Philippines for her unsolicited statements against the Judiciary. 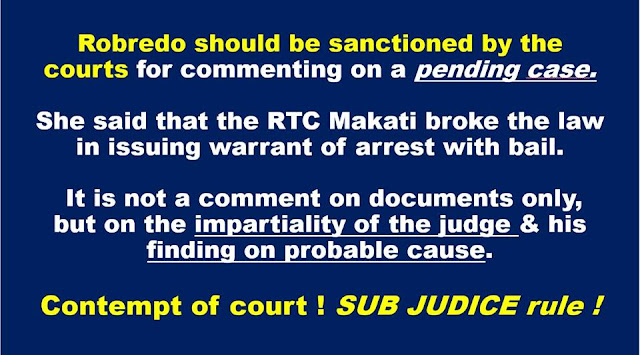 According to Atty. Paula Knack, VP Leni Robredo should be sanctioned by the courts for commenting on a pending case after she claimed that the RTC Makati broke the law in issuing warrant of arrest with bail against Sen. Antonio Trillanes.

The veteran international lawyer also noted that the statement of VP Leni against the Judiciary "is not a comment on documents only, but on the impartiality of the judges and his finding on probable cause." Atty. Knack stated.

Atty. Knack slammed the Vice President for her statement against the Makati RTC as a blatant violation of the law and even called Robredo as an extremely stupid lawyer.