Posted by Phil Newsome on July 30, 2018
Veteran journalist and former ambassador Rigoberto Tiglao made another astonishing expose on his latest column for The Manila Times as he asked "Do the Yellows Now Control Rappler?" The statement of Tiglao was due to the fact that two of the most vocal Yellow supporter are now sitting at Rappler's Board. 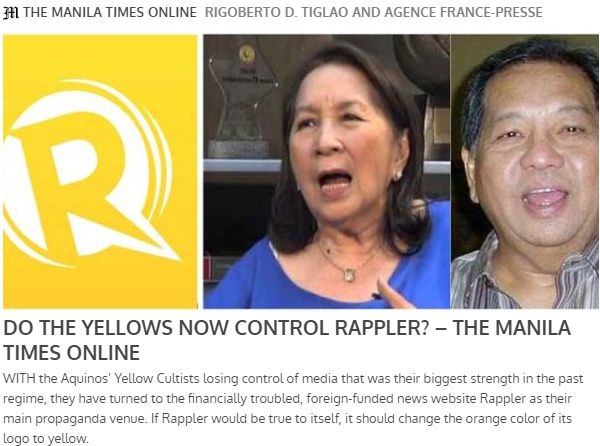 According to Rigoberto D. Tiglao, with the Aquinos' Yellow Cultists losing control of media that was their biggest strength in the past regime, they have turned to the financially troubled, foreign-funded news website Rappler as their alleged main propaganda venue.

Based upon the sources from the business community, they claim that at least two old oligarchic clans that were close to former President Benigno Aquino 3rd are now either the biggest funder, or in fact the largest stockholders, of Rappler.

The information provided to Tiglao also revealed that Rappler's original biggegst shareholder, property tycoon Benjamin Bitanga, gave up on the controversial media firm in 2016, exasperated over the reckless anti-Duterte reportage of the media outfit he couldn't control.

Aside from Bitanga, Rappler's two American funders, North Base Media and Omidyar Network, which had put in P150 million from 2015 to 2016, will no longer touch the firm right now because they are really irate that they were misinformed on the legal issues their funding whould encounter, which involves the constitutional ban on foreign participation in any form in Philippine media.

According to Bobi Tiglao's expose, the allegations that the Yellows have moved into Rappler is bolstered by the fact that last March, Bitanga's representatives in the board were removed. Among the new board members are two who are not only of the Yellow Cult but are staunch "Coryistas."

The two Coryistas were identified as "Solita Monsod, the late former Pres. Cory Aquino's economic planning secretary, her husband Christian has been a director of several companies controlled by the Eugenio Lopez elite clan. Aside from Monsod, a fellow Dilawan Fulgencio Factoran, Jr., who served as Cory's environment and natural resources secretary, also served as director of Central Azucarera de Tarlac.

Factoran appears to have successfully parlayed his experience as environment secretary into directorships in mining firms such as Atlas Consilidated Mining and Nickel Asia for many years now.

Aside from the two Pro-Yellow personalities sitting at Rappler's Board, another new member is lawyer Federico Prieto, and the most controversial member of the Rappler Board is the appointment of Carlo Almendral, a technology entrepreneur whose work has been entirely in San Francisco.

Rigoberto Tiglao also questioned the supposed donations of $1 million to the 14 managers of Rappler by Omidyar Network because the international company didn't made any announcement that the said money were indeed donated to the Philippines through Rappler.

The $1 million donation to all the managers of Rappler will surely be a headache once the BIR enters the equation. The BIR already charged the firm with a tax evasion charge, claiming that it issued and sold P181.57 million worth of Philippine Depository Receipts to the American firms but failed to pay income and value-added taxes for the transaction. BIR also claimed that Rappler's tax liability amounted to P134 million, which the media outfit had not paid, and had not yet even reported.

To know more about the expose of Rigoberto Tiglao by going to the official website of The Manila Times which is available below.