Posted by Phil Newsome on April 17, 2018
A concerned citizen identified as Jun Avelino shared a very interesting expose about the brilliant strategy conducted by Facebook in partnering with controversial media outfits Rappler and Vera Files for their fact-checking activities. 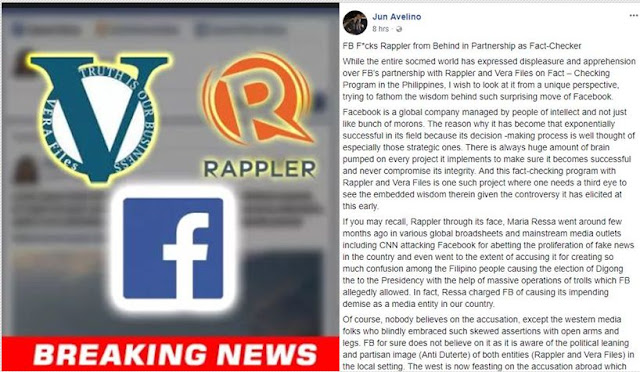 According to Jun Avelino, the world's largest social networking site Facebook could be employing a very brilliant strategy on how to deal with Rappler and Vera Files, despite the fact that some members of the socmed world expressed displeasure and apprehension over their fact-checking partnerships.

The concerned citizen noted that Facebook is a global company managed by people of intellect and not just like bunch of morons, and one of the reasons why it become successful was due to its decision-making prowess and they will never compromise their integrity.

FB F*cks Rappler from Behind in Partnership as Fact-Checker

While the entire socmed world has expressed displeasure and apprehension over FB’s partnership with Rappler and Vera Files on Fact – Checking Program in the Philippines, I wish to look at it from a unique perspective, trying to fathom the wisdom behind such surprising move of Facebook.

Facebook is a global company managed by people of intellect and not just like bunch of morons. The reason why it has become that exponentially successful in its field because its decision -making process is well thought of especially those strategic ones. There is always huge amount of brain pumped on every project it implements to make sure it becomes successful and never compromise its integrity. And this fact-checking program with Rappler and Vera Files is one such project where one needs a third eye to see the embedded wisdom therein given the controversy it has elicited at this early.

If you may recall, Rappler through its face, Maria Ressa went around few months ago in various global broadsheets and mainstream media outlets including CNN attacking Facebook for abetting the proliferation of fake news in the country and even went to the extent of accusing it for creating so much confusion among the Filipino people causing the election of Digong the to the Presidency with the help of massive operations of trolls which FB allegedly allowed. In fact, Ressa charged FB of causing its impending demise as a media entity in our country.

Of course, nobody believes on the accusation, except the western media folks who blindly embraced such skewed assertions with open arms and legs. FB for sure does not believe on it as it is aware of the political leaning and partisan image (Anti Duterte) of both entities (Rappler and Vera Files) in the local setting. The west is now feasting on the accusation abroad which somehow has become some kind of an irritant to the image of FB. So how do you think FB can stop the global impression being painted against it that it has done something wrong on its operations in the Philippines? FB’s approach is intelligently tricky. It uses the accuser to prove that the accusation is wrong.

Folks, we all know that the fact-checking program would really violate our laws as the same would amount to censorship and especially so that it will be undertaken by entities with dubious personality – one is a partisan media group while the other has been declared as illegally operating as a media entity by SEC for violation of our laws. Now, even before the program can take off, it will be (as it has recently been) attacked, ridiculed and even protested to by government agencies, the bloggers and the entire social media citizenry themselves. Assuming it can take off and starts its censorship activities, you can imagine the barrage of cases to be filed before the courts, committee hearings left and right to be conducted and oh boy, you can imagine the scenic inferno it will give to Rappler and Vera Files in doing its job. Of course, FB, given its business acumen, will definitely put a caveat in the program, that will surely absolve it from any liability whatsoever, particularly on the matter of violation of laws on censorship which I believe its battery of lawyers must have carefully weighed in already.

When the heat is too much for everyone to take, FB will then withdraw and eventually scrap the program for being perceived as violative of Philippine laws owing to the expected cases which will be filed against it and the noise and public clamor for it to be stopped. Then FB can now turn to the world and say…. “Look, morons from the West… these guys accused me of wrongdoing in their own country, particularly that of abetting the proliferation of fake news and they wanted me to do some fact checking. I entered partnership with them in doing what they wanted and ended up with such legal quagmire as violating Philippine laws which FB never wanted on the first place considering how Filipinos love FB. These 2 idiots are a farce whose reputation and image in their own country stink like a filthy smell of their own shitty ass. We therefore do not believe them. I am sorry but I have to disengage and throw the program off the window…

Under the scenario, FB is out and Rappler and Vera Files will be roasted under legal debacles not to mention the wrath of the social media citizenry which will certainly feast on pulling down the guillotine of condemnation over their heads thereby bringing them to their final resting place.

In a nutshell, the story is like this. Ressa of Rappler accused FB of causing Rappler’s demise. FB’s response is priceless. Hit Ressa’s ass and that of Rappler to the graveyard and gave both a decent burial. And the Vera Files? C’mon folks. Give me a break. Ressa’s ass alone is already too much for FB to take considering its global standard. If you insist on putting Ellen Tordesilla’s face in the equation, it will bring such mayhem of catastrophic proportion. FB and social medial will definitely puke to death and not only in our country, but the world over. Please, let us be magnanimous to them…. Peace! – JA.