Posted by Phil Newsome on June 26, 2019
A concerned netizen shared a brilliant suggestions on social media on how the camp of VP Leni could silenced her critics who claimed that she is "Boba." VP Leni Robredo made headlines earlier after she was called out by Sec. Teddy Locsin as "Boba." 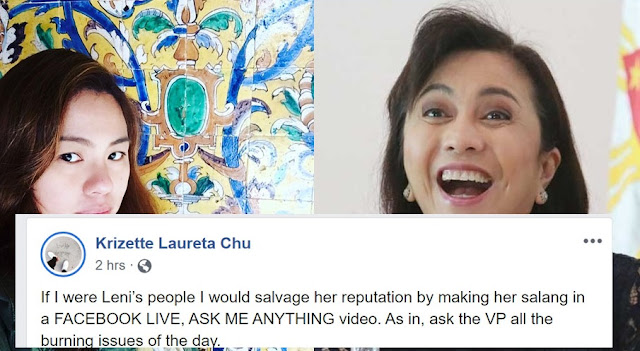 Micro-blogger and Duterte defender Krizette Laureta Chu suggested that if the camps of VP Leni wanted to salvage the Vice President's reputation they should initiate a Facebook Live, Ask Me Anything video.

This could be used as a venue for all Filipinos and her critics to asks all the burning questions of the day to prove once and for all that she is indeed a brilliant government officials which could easily counter the "Boba" tag on her by Sec. Teddy Locsin.

The concerned netizen then added that if the camp of VP Leni agree with her suggestions this could be the perfect time also for Sass Rogando Sasot to ask VP Leni about international relations, China issues and aske about her stand on diplomatic dilemmas as well as her stand on Kapa issue and how the Ponzi scheme operate.

Thinking Pinoy could also asked about statistics and poverty in the country and what Angat Buhay has done significantly impact. Atty. Trixie can also ask VP Leni legal quesions as to the veracity of her information re Palit Ulo.

If I were Leni’s people I would salvage her reputation by making her salang in a FACEBOOK LIVE, ASK ME ANYTHING video. As in, ask the VP all the burning issues of the day.

As in Sass can ask questions about international relations and China issues and what her stand is in the ongoing diplomatic dilemmas, we can ask about her stand on KAPA and how Ponzi schemes operate, and how she can ensure that our people do not fall victim to get rich quick schemes, RJ can ask about statistics and poverty rates in the country and what Angat Buhay has done to significantly impact it, Trixie can ask legal questions as to the veracity of her information re Palit Ulo and if she can provide more factual reports, we can ask her about the space program that shhsjksnsbolshsnksk.

What a great way to dispel any “bobo” tag.

Game? Just a little PR thing that is SURE to humiliate Locsin because Madam VP can flex her intellectual powers and prove to him she has a brain.